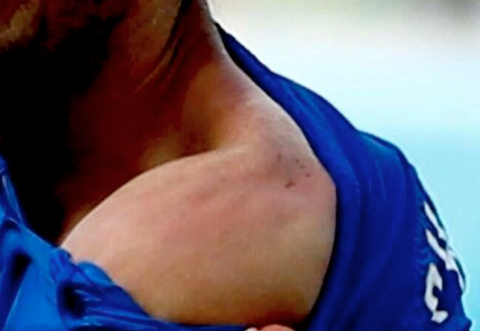 Faced with a smothering and frustrating Italian defense in the must-win World Cup game, the Uruguayan superstar responded with his front teeth.

It came at about the 80th minute when Suarez and Italian defender Giorgio Chiellini got tangled up in front of Italy’s goal. 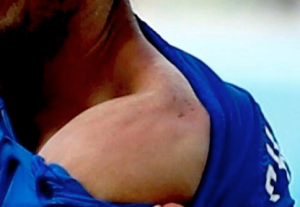 The apparent chomp happened in an instant, but was caught by television cameras and became a worldwide sensation — and could lead to Suarez being kicked out of the World Cup after FIFA officially announced an investigation early Wednesday.

Suarez was suspended following biting incidents in the Netherlands in 2010 and in England in 2013.

He also was suspended for racially abusing Manchester United’s Patrice Evra in a premier League in the past.

British tabloids have teasingly called him a vampire, and social media artists have had fun manipulating his photo into images of Dracula and Hannibal Lecter.

And he was responsible for one of the most talked-about moments of the 2010 World Cup, when he purposefully used his hand to prevent a Ghana goal near the end of the quarterfinals.

Suarez received a red card and was banned for the next game, but Ghana missed the penalty kick and was eliminated.

A ruling will be announced before Uruguay plays Colombia on Saturday.