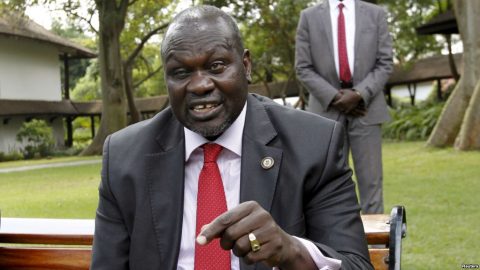 Ministers of the East African bloc IGAD said Monday that Machar will not be invited to the next meeting for the peace process, which is aimed at revitalizing a 2015 peace agreement between the rebels and South Sudanese government.

“We already agreed that the process, all opposition groups including Riek Machar’s ideas, the representatives of Riek Machar, can be involved in this process. For the time being, physically we are not inviting Riek Machar,” Ethiopian Foreign Minister Workneh Gebeyehu said at the end of the ministers’ meeting in South Sudan’s capital, Juba.

Machar, a former South Sudanese vice president, currently lives in exile in South Africa, where he fled after an outbreak of violence in Juba in July 2016 killed nearly 300 people./VOA