After Earthquake, Many Killed By Avalanche In Italy Hotel 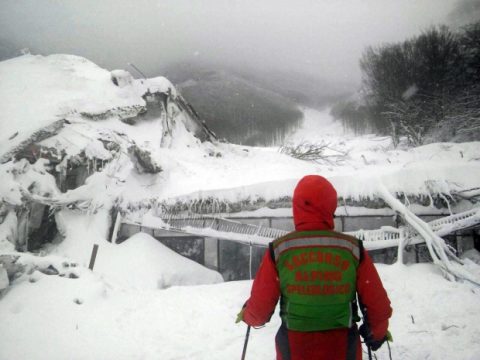 BALTIMORE, MD (AFRICAN EXAMINER) – Several people have been killed after a hotel in Italy was hit by an avalanche, apparently triggered by an earthquake Wednesday.

An Italian rescue official confirmed that other emergency and aid workers battled overnight to reach the hotel close to the Gran Sasso mountain in the Abruzzo region.

“There are many deaths,” confirmed the head of a mountain rescue team, Antonio Crocetta.
Reports indicate that no fewer than 30 people were in the Rigopiano hotel as at the time of the avalanche.

The roof partly collapsed and local residents in Farindola alerted emergency services. But a snowstorm and blocked routes have made access to the hotel difficult. Local media said the first rescuers only reached the hotel on skis at 04:00 (03:00 GMT) on Thursday.

Rescuers said at least 20 tourists and seven staff have been inside the Rigopiano hotel when it was hit by the avalanche.

The mountainous region of Central Italy was hit by a succession of four earthquakes Wednesday and further tremors were reported overnight.

The quakes came after the regions of Abruzzo, Marche and Lazio were hit by persistent heavy snow. Many villages became inaccessible and emergency services worked through the night into Thursday to reach them.

It would be recalled that 298 people were killed in last August when the same region was hit by an earthquake.