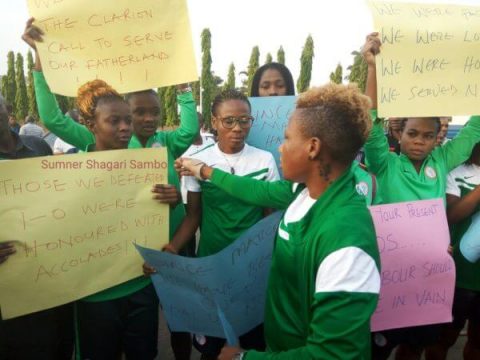 The protest coincided with President Muhammadu Buhari’s schedule with the joint session of the National Assembly (NASS) for presentation of the 2017 budget.

However, while invited to a meeting with the Chief of Staff (COS) to Mr. President, Mr. Abba Kyari, the players were promised that their outstanding allowance of $25,000 each would be paid within 48 hours – Friday this week.

The players displayed different placards with various inscriptions while the protest lasted.

It would be recalled that the Super Falcons emerged the champion of the 10th African Women Cup of Nations having defeated the host, Cameroon 1-0 a forthnight ago.

The delayed allowance has prompted many accusations and counter within the country’s football circle.

The Minister of Sports and Youths, Mr. Solomin Dalung was once quoted as saying that the non payment of the players allowance was due to underrating – that nobody expected the team to win the Championship. The Minister has however denied ever making such statement.

The players after meeting with the COS have since returned to their Agura Hotel, in Abuja.