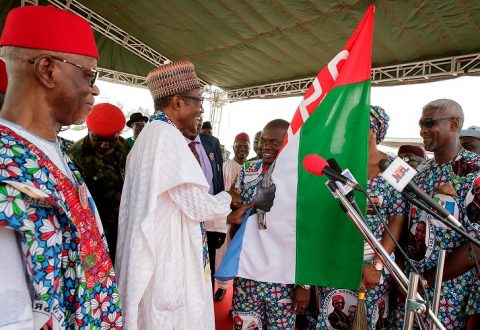 The president who arrived Awka from Ebonyi state,  was in Anambra to campaign for Dr. Tony Nwoye, the gubernatorial candidate of the All Progressives Congress, APC, in  the Saturday’s governorship election in the state.

President Buhari, who was accompanied by political leaders from the five Southeast states, touched down in a presidential chopper at exactly 1:40pm at the Alex Ekwueme square, where he was received  by Governor Willie Obiano, before he proceeded to the APC rally ground at the main bowl of the square.

African Examiner reports that it was the first time Mr Buhari was visiting the state since he took over mantle of leadership in 2015.

Addressing the mammoth crowd, made up of APC faithful, supporters, and political stakeholders, the president, enjoined  the Anambra electorate to massively vote for the party’s candidate, Dr Tony Nwoye, on Saturday, stressing that  the state has a lot to benefit under APC government.

According to him, aside Anambra, the other four states of IMO, Ebonyi, Abia and Enugu  would equally gain a lot as several infrastructures have been earmarked for construction in the South-East in the 2018 budget.

Our Correspondent reports that the president  was accompanied by 12  state governors, 18 senators from the APC and serving Ministers.

Speaking on behalf of Ministers from the South- East,  Dr Chris Ngige, the Minister of Labour and Employment, said APC in Anambra was thorough in her choice of Nwoye and Dozie Ikedife as guber candidate and deputy for the Nov.18 polls, noting that the overwhelming crowd at the rally was an indication  that the party was truly on ground in Anambra.

Ngige, who hails from the state said, “We have toured the nook and carnies of the state during our campaign tour we are ready for the election and the people are behind APC.

“The other political parties also in this contest are only afraid because they have done nothing to show the people that their parties deserve the mandate of Anambra people again’’, he said.

‎ “If you are governor, your reward will come from the people when you perform well, the roads I built more than 14 years ago are standing, why the ones they built just yesterday are in bad shape, yet they want another mandate.

“My position here today is to sign a surety on behalf of the Nwoye and Ikedife, that the two will not fail our people if voted into office.”

However, the structure of the ruling All progressive Grand Alliance APGA, in the state suffered a major setback  Wednesday, as one of its chieftains and  first son of the late Biafran warlord,  Dim Chukwuemeka Odumegwu Ojukwu, Mr Emeka  Ojukwu (Jnr) defected from the party founded by his father, to the APC.

He informed  President Buhari that his decision to quit his former party, was aimed at  ensuring  that the people of Anambra and Igbo land embraces  the mainstream national politics.

The Junior Ojukwu, had used the forum to  tongue lashed APGA and Anambra governor, Willy Obiano who is seeking re-election under the platform for always using his late father’s name for campaigns during elections, when in the true sense of it, he was sure his father would have loved to play in mainstream politics if he were alive.

Reacting to development, the embattled national chairman of APGA, Chief Victor Oye, said his exit will have no effect on the party, describing  Ojukwu Jnr. as a prodigal son.

President Buhari, has since returned back to Abuja, Nigeria’s capital.