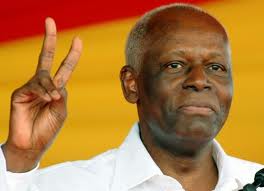 Angolan police on Thursday arrested at least three people at a protest in Luanda organised by a youth movement which is calling for President Jose Eduardo dos Santos to quit after 34 years in power.

The large police contingent, which was armed with machine guns and pistols and also had dogs, urged foreign journalists to leave the scene, saying they could not guarantee their safety. One officer warned reporters they could be detained for disobeying police orders.

The Angolan Revolutionary Movement (ARM) has staged several protests since March 2011, accusing Dos Santos of mismanaging Angola’s oil revenues and suppressing human rights. Though small in numbers, it has survived a police clampdown on most rallies.

Dos Santos, who last year easily won a one-sided election to secure a new five-year term, has dismissed the youthful opponents as not representative of the wider population. His ruling MPLA party has dominated elections since it emerged the victor in 2002 from a 27-year civil war.

The youth protest movement planned to hold a rally at busy Independence Square in central Luanda, but police – including dozens of officers, several large trucks and dogs – blocked off access to the centre of the square.

“The way they (police) have set this up, it’s impossible to get to the middle (of the square),” Adolfo Campos, one of the demonstrators, told reporters shortly before he was detained.

“It’s very tense, this is how Angola is,” Pedrovski Teca, another protester, said.

They said the event was authorised under Angolan law as they did not receive any formal response from the local government to their communication giving notice of the protest.

However, on Wednesday a police spokesman had said the demonstration was not authorised and that police would use force if necessary to repress it as they expected activists to carry posters inciting violence and disturbing public order.

None of the protesters at the event displayed any posters, leaflets or clothing marked with political slogans.

Angola, Africa’s No. 2 oil producer, hosts one of the world’s youngest populations. Two-thirds of its estimated 20 million people are under 25.

But despite a flourishing oil industry that will help fuel growth of just over 7 percent this year, the gap between rich and poor in the southern African nation remains acute and youth unemployment is 30 percent, according to government estimates.

Speaking to 3,000 youths at an official event last week, Dos Santos said jobs for the young was one of his main priorities.

But he has dismissed the risk of social upheaval, saying in a rare televised interview in June that most Angolans supported his government…/