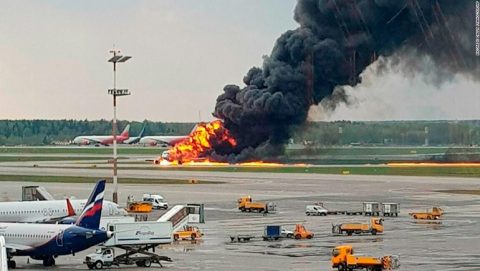 The Russian-made Sukhoi Superjet, which was carrying 78 people, careened across the runway with thick, black smoke pouring out from behind, footage from the scene showed. After the Aeroflot aircraft skidded to a stop perpendicular to the runway, passengers scrambled out of the burning hulk, some with their children in their arms, screaming.

The plane turned around and landed at Sheremetyevo shortly after takeoff en route to Murmansk in northern Russia.

Russia has long struggled with a poor air safety record, and crashes are fairly common. Between 2008 and 2017, 326 people died in accidents on Russian-scheduled commercial flights, according to the International Civil Aviation Organization. Sixty-one people died in the same period on U.S. flights.