Brazil Through as Chile Pay The Penalty 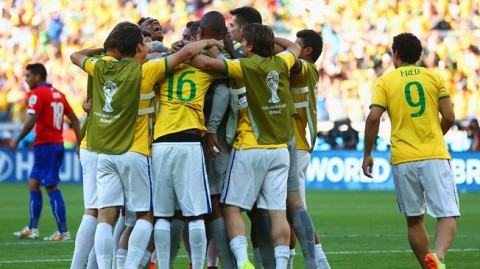 Hosts Brazil have squeezed through to the quarter-finals of the FIFA World Cup™ on penalties after a tense, thrilling 1-1 draw with Chile at the Estadio Mineirao in Belo Horizonte. Gonzalo Jara hit the post with the decisive kick, while Julio Cesar saved two, to give Brazil a 3-2 win in the shootout and send the valiant Chileans home.

Chile had only made it this far at the World Cup on three previous occasions and, having been beaten by Brazil on each of those, knew that the odds and omens were heavily stacked against them. The early stages of the match suggested that this one, too, would closely follow that historical pattern, with Marcelo snatching on an early half-cleared corner to curl in a powerful left-foot shot that flashed just wide of the left-hand post. 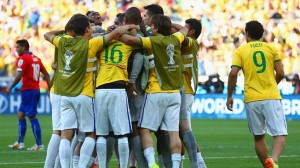 It was a signal of intent from the hosts and, after seeing penalty appeals turned down at both ends, the Mineirao crowd were able to cheer a Seleção opener after 18 minutes. Neymar was its architect, curling in an inswinging corner from the left that was bundled home from close range by David Luiz – with a little help from Jara – after Thiago Silva had won the initial near-post header.

Brazil were in the ascendancy and, with the fans buoyant, Neymar almost doubled their lead on 26 minutes, outpacing Gary Medel on a surge into the box only to drag his left-foot shot wide of the far post. All that positive work was soon to be undone, though, with Chile leveling six minutes later due to a moment of defensive slackness.

Hulk and Marcelo were the guilty parties, with their poorly executed throw-in routine near the byline allowing Eduardo Vargas to steal in and square for Alexis Sanchez. Unmarked and scarcely able to believe his luck, the Barcelona winger had time and space to pick his spot and duly measured a low-right foot shot into the far corner of the net from 12 yards.

Moments of hesitancy at the back continued to plague Luiz Felipe Scolari’s side, but they remained the game’s most positive attacking force and came close to re-establishing their lead on three more occasions prior to the break. First, after good play down the right by Dani Alves and Oscar, Neymar saw his goal-bound header deflected wide, then Fred shot over from close range and a 30-yard Alves effort forced a fine tip-over from Claudio Bravo.

The Seleção fans continued to roar their heroes forward, but while they were cheering again nine minutes into the second half, Hulk’s effort was ruled out for use of the arm in the build-up to him scuffing the ball home. At the other end, Brazil were indebted to goalkeeper Cesar for a wonderful reflex save, somehow diverting behind a Charles Aranguiz effort that seemed destined for the back of the net.

Chile continued to make life difficult for their hosts and opportunities began to dry up, with Bravo saving well from Neymar and Hulk on the occasions when they did break through. Extra time was therefore called upon to settle the outcome, but after Bravo again denied Hulk and substitute Mauricio Pinilla struck the bar, the stalemate remained.

That left penalties to decide this enthralling contest, and even that was impossible to predict, with Jara ultimately the fall guy after Luiz, Marcelo and Neymar had all found the net for Brazil.