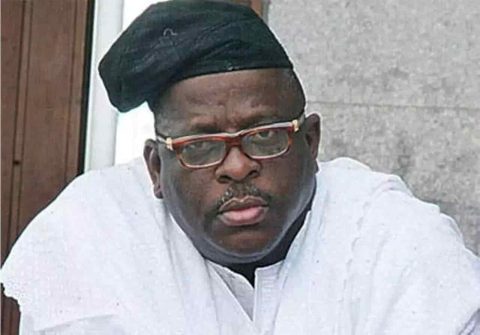 (AFRICAN EXAMINER) – A former senator from Ogun state,  Buruji Kashmau, has died of complications from COVID-19.

Former senator, Ben Murray-Bruce, who broke the news on Twitter on Saturday said Kashamu died at First Cardiologist Consultants in Lagos. He was aged 62.

Murray Bruce writes: “I have just lost my good friend of forever to #COVID19. Until his death, Sen. Buruji Kashamu and I were inseparable. He died today at First Cardiology Consultants, in Lagos. May his gentle soul rest in peace. I pray his family and loved ones the fortitude to bear this heavy.”

Meanwhile,  a former governor of Ogun, Sen. Ibikunle Amosun, has expressed sadness over the death of Sen. Buruji Kashamu.

Amosun, who is representing Ogun Central Senatorial District, in a statement issued by his Media Assistant, Alhaji Bola Adeyemi, described Kashamu’s death as a loss to Nigeria.

“Death, once again, has robbed us of the contributions of an enigmatic politician of the People’s Democratic Party (PDP) who represented Ogun East Senatorial District at the 8th Senate.

“Although we belonged to different political persuasions and disagreed on most issues, Sen. Kashamu will nonetheless be remembered for his assertive presence and uncommon doggedness in the political arena.

“He fought myriad of wars with every breadth in his soul in the defence of whatever he believed in and for his personal freedom.

“Hate him or love him, he could not be easily ignored,” Amosun said.

Amosun prayed that the Almighty Allah would forgive Kashamu’s sins and grant him eternal rest.

He expressed condolences to the nuclear and political family members of the deceased as well as to Ijebu Igbo community and Ogun as a whole.