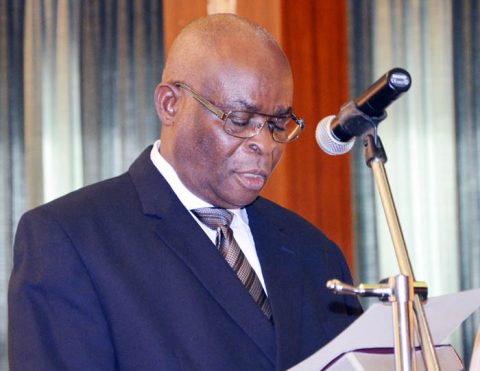 ABUJA, NIGERIA (AFRICAN EXAMINER) – Barely 24 hours after the prosecution Counsel presented his application, the Code of Conduct Tribunal (CCT) has ordered the Inspector-General of Police (IGP) Muhammad Adamu and the Director-General of Police to effect the arrest of the suspended Chief Justice of Nigeria (CJN), Mr. Walter Onnoghen.

The Chairman of CCT three-man panel Justice Danladi Umar in his ruling Wednesday ordered the security agencies to produce Onnoghen at the tribunal Friday, February 15, 2019.

Ahead of his ruling, Justice Umar dismissed the objection raised against the application for the issuance of the arrest warrant and ordered “I want to see the defendant in the dock on Friday”.

‎The order followed an application by the lead prosecuting counsel, Mr. Aliyu Umar (SAN), who Tuesday complained that the continued absence of the CJN from the CCT was a violation of provisions of the Administration of Criminal Justice Act.

The Prosecutor linked his application to section 6(1) of the Practice Direction of the CCT. He also opposed the call on the three-man tribunal by the lead defence counsel, Chief Adegboyega Awomolo (SAN), to hear all pending applications.

Mr. Umar Tuesday maintained that by virtue of section 396(2) of the Administration of Criminal Justice Act 2015 no objections could be raised by the defendant until he took his plea.

Onnoghen’s appearance expected at the CCT Friday is a day to the first round of the Nigeria’s general poll – which is the Presidential and National Assembly (NASS) contest.

Justice Onnoghen is being accused and prosecuted following a petition alleging his false assets declaration.

The embattled Justice has since admitted he erred and forgot to include the contentious assets in declaration while assuming office as the CJN.