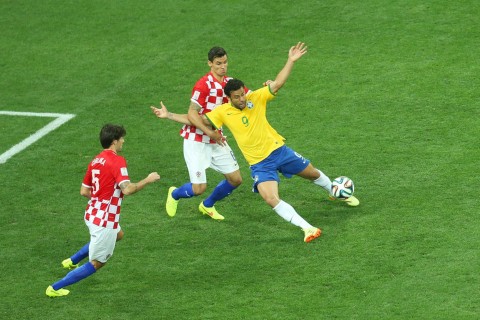 A hugely controversial penalty helped turn the game around for the hosts after Marcelo’s own goal had given Croatia a shock lead played as Brazil beat Croatia 3-1 in the opening game of the 2014 FIFA World Cup Thursday.

After a build-up marred by social unrest and demonstrations, fireworks lit up the night sky over this sprawling city to celebrate goals during the game.

But this was not a comfortable night for the hosts of whom so much is expected. 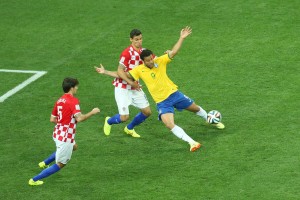 They fell behind early in the match and, after they had equalised through the mesmerising Neymar, they needed a soft penalty awarded by referee Yuichi Nishimura and converted by Neymar to give them victory.

It was a nervous, tense night for coach Luis Felipe Scolari and his team. The game was short on the beautiful but the result was everything.

Few will remember a turgid Opening Ceremony but no one who saw the game will forget the pre-match rendition of the Brazilian national anthem.

David Luiz shouted it out, eyes bulging, body shaking. Neymar’s lip quivered. Others closed their eyes as if in prayer.

Those were spine-tingling moments when a nation seemed to be speaking, pleading for glory.

But Croatia are Brazil’s strongest opponents in Group A and they soon set about proving it.

They gave Brazil a warning when Ivica Olic rose highest to meet a cross at the back post and headed wide when he ought to have scored.

Then, after 11 minutes, the unthinkable happened and Croatia took the lead when Marcelo diverted a cross into his own net.

Suddenly, you could smell fear in the Brazil team. For a while the enormity of the impact of defeat stifled them.

Then, after half an hour, Brazil forced their way back into the game and the Neymar Show began.

The poster boy of Brazilian football, the man whose number 10 shirt lined the avenues leading to the stadium, surged away from his markers just inside the Croatia half.

He advanced to the edge of the box, sidestepped a defender and hit a bobbling shot goalwards.

The crowd went wild. Relief and exultation rent the stadium. And the Sao Paulo night sky was lit by a thousand firecrackers set off all over the city.

Brazil needed a huge stroke of luck to take the lead 20 minutes from time.

Lovren barely touched Fred as he shielded the ball with his back to goal but when the Brazil striker went down, the referee pointed to the spot.

Croatia protested furiously. Neymar waited for the longest time before starting his run up. He stuttered his stride and tried to wait for Pletikosa to commit himself.

Oscar wrapped things up in injury time when he toe-poked a shot inside the post but it did little to eat at the sense of injustice gnawing at Croatia.