Despite Mediation, Edo Assembly Adjourns Sitting Due to Presence of Suspended Lawmakers 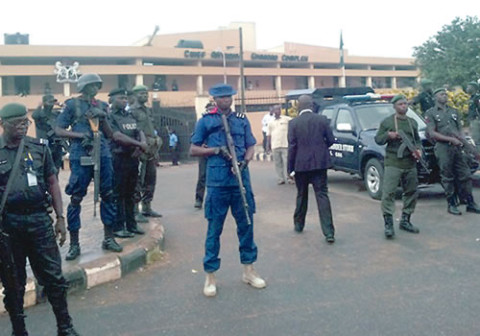 Despite efforts by various stakeholders to douse tension, the crisis rocking  Edo State House of Assembly appears not to end very soon as the legislative house adjourned sitting  on Monday till June 23, due to presence of the suspended four lawmakers.

Chairman House Committee on Information, Adjoto Kabiru, gave the reason for definite adjournment in a chat with newsmen.

The House has been in crisis since June 9 following the suspension of four members including the Deputy Speaker. Consequently, the affected members rejected their suspension and held parallel sittings in the house.

“The House could not sit today because we have strangers in our midst. By their action, they have disregarded the court order served on them and we cannot sit with them.  As a responsible Assembly, we will ensure that a contempt proceeding is instituted against the suspended lawmakers. With this development, we have resolved to adjourn sitting to Monday, June 23,” Hon.  Kabiru informed.

He hinted further that the assembly would remain under lock and key, while the lawmakers’ offices would remain open.

With this development, he concluded no lawmaker was expected to be seen close to the chambers.