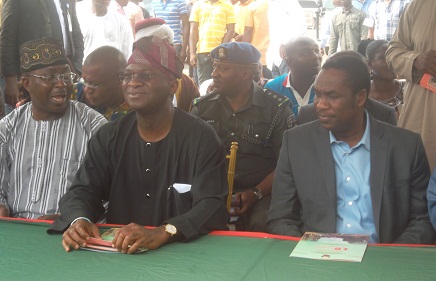 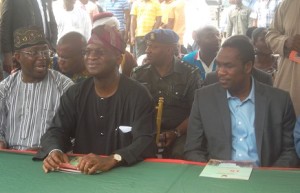 This advice and warning were given on Tuesday by the duo of the state Governor, Babatunde Raji Fashola, SAN; and the state Commissioner for Works and Infrastructure, Dr Kadri Obafemi Hamzat in Mushin. The occasion was the handing over of 16 newly constructed and rehabilitated roads by the state government to the people of Mushin community.

First to speak was Hamzat who while welcoming the Governor and members of the state executive council to the event warned that, “these are roads are not constructed for use as mechanics workshops. Don’t repair vehicles on these roads. Please allow the roads to serve the purpose they are meant for”.

The Commissioner stated further that the roads are further indication of the determination of the Fashola administration to ensure that the people of the state enjoy dividends of democracy even at their doorsteps. “For the residents of the areas where the roads we are delivering today are located, they will bear testimony to the fact that they have become virtually impassable before the intervention of the state government,” Hamzat said.

According to him, the decision to embark on such massive road rehabilitation especially in Mushin, showed the love the Fashola administration has for the people of the state particularly the residents of Mushin.

“The only way you can show appreciation to the administration of Governor Fashola is for you to be law abiding always, pay your taxes regularly, ensure proper maintenance of these roads and most importantly continue to support and rally round our great party, the All Progressive Congress (APC),” Hamzat said.

Governor Fashola, speaking later, corroborated the claim of the Commissioner.

“If it is only to commission these roads, I will not have been here, the commissioner and the special adviser can handle that. But I came purposely to talk to you that these roads are meant to provide vehicles smooth passage of way. They are not trading centres neither are they mechanics workshops. Allow the roads to perform the duty they are meant for. These roads are built with your money, the tax payers’ money. By trading and doing auto works on them, you are depriving some tax payers the right to enjoy what they have paid for,” the Governor said.

Fashola stated further that all the roads constructed were provided with side walks on the two sides for pedestrians to make use of. “So when you started trading on the side walks, you are depriving the pedestrians who will no other option than to walk on the  roads thereby preventing free flow of traffic,” he said.

Apart from the Governor and members of the state executive council, others present at the event include the Chairman of Odiolowo/Ojuwoye Local Council Development Area (LCDA), Aremo Taofeek Adeyemi Alli; his