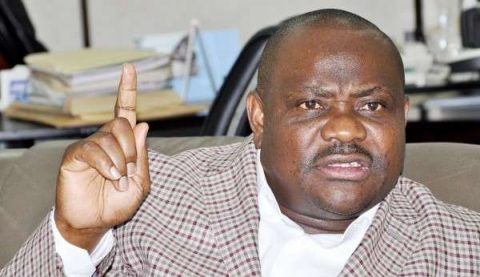 PORT HARCOURT, RIVERS STATE (AFRICAN EXAMINER)- RiverS state governor, Nyesome Wike has hit back at the Department of state security services (DSS) saying no federal agencies can silent him into defending his people.

The governor spoke in Port Harcourt when he met with the Rivers State Elders Council of Ministers (RISECOM).

“None of them gave me the mandate. The people of Rivers State gave me this mandate and I will  never sell the interest of this state for whatever reason. I will not bring out the money of Rivers State  to sponsor other people outside the state.”

“If they like, let them bring all manner of accusations daily, it will not cow me. Three days ago, they sponsored protests against  me in Abuja with the Police  leading the protesters.

“It is so unfortunate how they can descend so low. The DSS  are unhappy  because  I stopped  them from kidnapping  a judge. Till today, they are yet to invite that particular judge.”.

Recall that the Department of State Security Service (DSS) had accused the governor of planning to sponsor a violent protest against the federal government.

In his reaction, Ekiti state governor Ayo Fayose also slammed the DSS over its allegations against Governor Wike.

“Assuming but not even conceding that anyone was planning to protest in support of Governor Wike, what is wrong with that? Was the DSS on sabbatical on Tuesday, when protest was held in the same Abuja against Governor Wike?

“Is the DSS now telling Nigerians that only supporters of the All Progressives Congress (APC) can protest and only protests against the Peoples Democratic Party (PDP) are sanctioned?” He stated.