Ekwueme In Coma, to be Flown Abroad for Medical Treatment 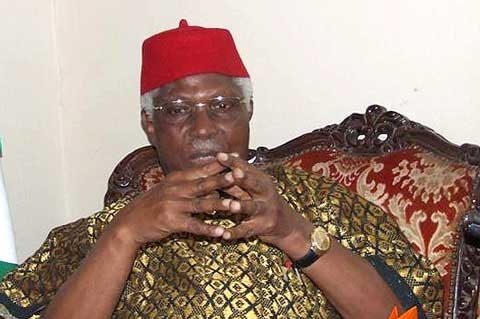 (AFRICAN EXAMINER) – Family members of ex- Nigeria’s Vice president, Dr. Alex Ekwueme, who went into coma after collapsing at his Enugu residence recently may have concluded arrangements to flown him abroad for medical treatment.

He is currently at the Intensive Care Unit (ICU) of Enugu based privately owned  Memfys Hospital for Neurosurgery located at Trans-Ekulu,area of  Enugu.

The ailing politician, who hails from Oko community, in Orumba North council area of Anambra state, Southeast Nigeria, was a  founding member of the People’s Democratic Party, PDP.

He was said to have collapsed about  2am last Saturday, at his residence located at Independence Layout, Enugu.

The development came  barely 10 days after he celebrated his 85th birthday.

Meanwhile, friends, and relations  were seen moving in and out of his Enugu residence on Wednesday to identify with the family.

A source close to the family who craved anonymity, told newsmen that “He was trying to get something from the table when he suddenly collapsed and immediately someone raised the alarm, we proceeded to revive him while cautious enough not to attract neighbours.”

“When it became obvious that he had lapsed into coma, we rushed him to a hospital , but we were referred to Memphys Hospital by medical consultants who had critically examined his condition.”

The source said that the family chose to keep the incident secret for a while with the hope that he would “miraculously” come out of coma.

“When there was no sign of improvement on Monday afternoon, we rallied round and informed the former governor of Anambra State, Mr. Peter Obi, who is like a son, and he has been making plans to fly him overseas.”