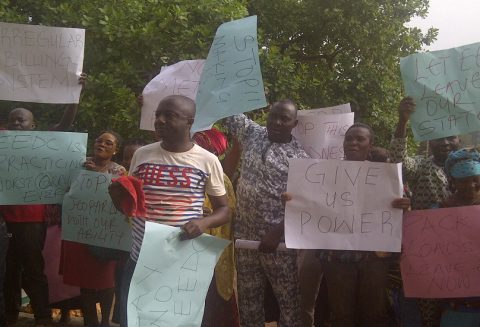 (AFRICAN EXAMINER) – Scores of electricity consumers in Enugu on Friday staged a protest to the state House of Assembly over incessant power outage, outrageous billing, alarming tariff among other forms of alleged exploitative activities by the Enugu Electricity Distribution Company, EEDC.

The protesters who displayed numerous placards with various inscriptions, had called on the lawmakers, to as a matter of urgency intervene on the issue.

They also demanded the exit of the EEDC, saying the company since inception, has continued to make life unbearable for citizens of the state.

The protesters explained that they decided to cry out based on the fact that they could no longer cope with the said “outrageous billing, epileptic power supply, among other inhuman acts by the electricity distribution company.

Addressing newsmen, spokesman for the protesters, Barrister Eze Ajuluchukwu, said we “are tired of this EDCC mess, and that is why we are calling on members of the Enugu state House of Assembly to rise up and do something about this ugly issue.”

Eze, who described  EDDC as an anti human  company, stressed that “we are giving them two options, it is either they give us electricity or they leave Enugu state.”

The masses according to him, are being exploited on daily basis by EEDC, and by their actions, the company is sabotaging the economic growth of the state.

As at the time of filing this report, the protesters have occupied the Assembly complex, insisting that the State would no longer condone the activities of the EEDC.

The aggrieved electricity consumers equally asked the Federal Government to as a matter of urgency undertake a review of the privatization ‎of the power sector in Nigeria, as the EEDC lacked the capacity to manage electricity distribution in south- East Nigeria.

Some of the placards displayed by the protesters read thus: “EEDC stop defrauding us, pack your load and go”; “we are tired of irregular billing system”;  “Our industries are folding on daily basis because of no power;  “we cannot take this any more, Say no to EEDC”

“We can no longer stand and watch EEDC make us poor, they have forced many people out of their businesses” among other placards.

Our Correspondent reports that  following the protest,  the Enugu state house assembly opened deliberations on the complaints of the protesters.