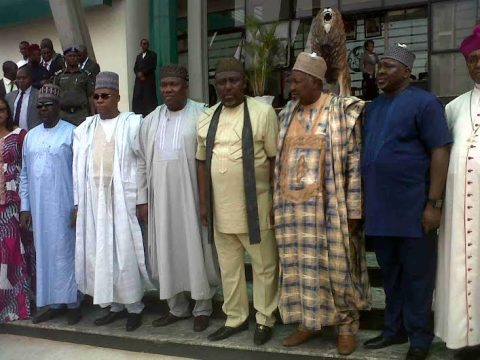 Led by its chairman and Imo State Governor, Owelle Rochas Okorocha, the progressive Governors, who visited under the auspices of the APC Governors Forum, condemned the attack in its entirety, describing it as a criminal act.

According to them, the incident was purely a criminal act, and the perpetrators when apprehended must be treated as such.

Speaking during the visit at the Enugu Government House, Okorocha, said “we the Governors of APC from various states in Nigeria are in Enugu today to sympathize with the Governor and good people of the State over the recent attack on Nimbo community”.

While commending Governor Ugwuanyi and traditional rulers in the state for the matured manner they handled the provocative attack, Okorocha assured that their forum will join hand with the Federal Government (FG) in ensuring that the perpetrators are brought to justice.

Owelle said: “It is important to state that Enugu State government showed serious maturity in handling the situation, especially as it did not allow it to degenerate into an ethno crisis.

“We want to once again, appeal for calm and peace in Enugu state, as the security agents intensify efforts in unraveling those behind the barbaric act” he added.

Okorocha also urged people of the south- east zone not to trivialize or politicise the attack, advising that irrespective of party and religious affiliation, “we are one nation”.

Also speaking, Governor Kashim Shetima of Borno state, had charged Nigerians to always imbibe the spirit of brotherhood in dealing with one another.

Shetima, who is also the Chairman, Northern Governors Forum, said as a people of one nation, with common destiny, we should always be our brothers’ keeper.

Welcoming the governors, Ugwuanyi, said your visit “today is quite heartwarming and shows your love for the people of Enugu state”.

He told the APC Governors, that the ugly incident has thrown the community and State into mourning and grief.

Ugwuanyi informed the visiting Governors, that he has set up a commission of inquiry to investigate the immediate and remote causes of all violent incidence in the State associated with suspected Fulani Herdsmen.

He disclosed that his administration has concluded plans to re-activate and strengthen the neighbourhood watch security system in the state.

In the APC Governors entourage were Governors Rochas Okorocha, of Imo, Rauf Aregbesola of Osun, Kashim Shetima of Borno, Mohammed Badaru Abubakar of Jigawa and Deputy governors of Yobe and Kogi states.