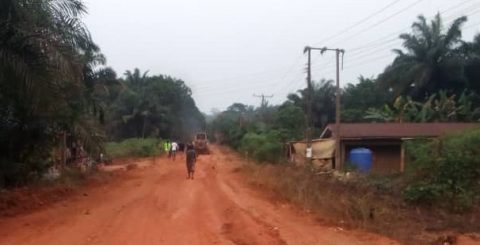 (AFRICAN EXAMINER) – The joy of people of Enugu Akwu-Achi Community in Oji River Council Area of Enugu State, South- East Nigeria, knew no bound on Tuesday, as one of their illustrious sons, who is a staff of Chevron Nigeria Limited, Mr. Victor Chimaobi Anyaegbudike, embarked on the rehabilitation of Obodo Ukwu-Umuike-Inyi link road in the locality.

African Examiner reports that the said road was before now a dead trap and was yearning for intervention.

Speaking with newsmen on the development, the excited residents of the locality, said they were delighted about the rehabilitation of the rural road, which they described as “one of the major economic life-wire of the area.

However, they regretted its many years of neglect and abandonment by previous governments, forcing the people to suffer untold hardship in commuting on the road.

The natives applauded the kind gesture of Anyaegbudike’s, who is the External Communications Coordinator, Policy, Government  and Public Affairs, Chevron Nigeria Ltd, describing his latest activity as “unprecedented”.

A native of the area who is also one of the youth leaders in the community, Barr. Ekemezie Mbonu , who said he was speaking the minds of the entire youths of the community, said the rehabilitation of the rural road was “the best philanthropic gesture ever received” by the community of late.

Mbonu said: “I wish to use this opportunity to join other sons and daughters of Elugwu Akwu Achi Autonomous Community to appreciate the best philanthropic gesture ever received.

“The Obodo Ukwu / Umuike / Nkwo Inyi Road which has been in a serious deplorable state, is  currently being graded by one of our illustrious sons,  Mr. Chimaobi Victor Anyaegbudike, a staff of Chevron Nig Ltd.  May God replenish his pocket ten folds in Jesus name, Amen.”

Also speaking, a Councilor, who represents the Enugu Akwu Ward in Oji River Local Government Council, an indigene of the community, Mr.  Nonso Chijioke noted that the rehabilitation of the road is a significant contribution to the social and economic development of the Enugu Akwu community and other surrounding communities in the area.

According to him, the state of the road has been deplorable over the years causing the people to go through immense stress to commute on the road.

“With this grading at least, the road has become easily accessible once again and the people are excited about the gesture by one of their sons, Mr. Anyaegbudike.

He acknowledged and appreciated the State government’s efforts in constructing about a kilometer of the road previously and expressed the hope that the community will witness the completion of the road project for the benefit of the people.

In his reaction, Anyaegbudike explained that he embarked on the road project in order to help ameliorate the sufferings of his people.

He noted that the gesture was a demonstration of the “Tradition of Care” for the community, a major learning from the place where he works.

The benefactor, expressed delight at the excitement the road project has brought among the people and the lives it will touch in the community, and called for more support to the people in terms of provision of social amenities and infrastructural development.