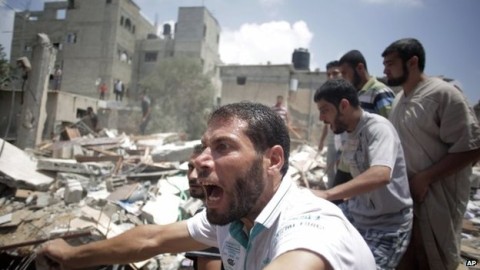 The raging Gaza ground offensive by the Israelis Military has hit Al-Aqsa Hospital in Deir al-Balah located in the central Gaza Strip killing five people and left over 60 injured. The hospital belongs to Palestinian Ministry of Health.

The two sides – Israeli army and Hamas have continued to record causality in the five – day old ground strike.

Not less than 30 people of two different Palestinian families died including children, overnight in the latest Israeli attacks. Israel army said 10 Hamas militants have been killed after using tunnels to get into Israel near the Sderot.town. It also said 170 Hamas fighters militants have been killed while 20 Israelis, 18 of whom were soldiers have also been silent. The two week stike (air and ground strikes) has so far recorded not less than 500 death.

Meanwhile, world leaders have intensified efforst to broker truce between Israel and Palestine. The United States (US) President Barrack Obama on Monday demanded immediate ceasefire to end the fighting and further killing.