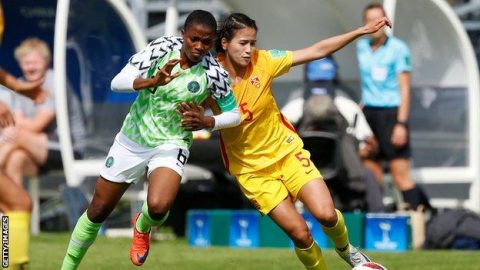 (AFRICAN EXAMINER) – National U-20 Women’s team, the Falconets, on Monday fought gallantly against China to reach the quarterfinals of the FIFA U20 Women’s World Cup, thanks to Rasheedat Ajibade’s equalizer.

The News Agency of Nigeria(NAN) reports that the Falconets scored deep in added time to level matters at 1-1 at the end of regulation time.

Ajibade scored in the 95th minute to cancel out the goal by China’s Zhang Linyan in the 41st minute.

The Falconets only needed to avoid defeat in the crucial final group game to reach the quarter-finals for the seventh time in nine editions.

Coming into the game, the Nigerian women’s team were placed second in Group D with three points from two games, same as their Chinese counterparts but had a superior goal difference.

The match played at the Stade de Clos Gastel, expectedly, lived up to the billing as a tough encounter for both sides, considering what was at stake for the two teams.

The Asians had better control of the game in the first half, stringing more coordinated passes and causing more troubles for the Falconets and creating better chances in Nigeria’s vital area.

The Chinese were rewarded in the 41st minute, when a mix-up and loss of concentration among the Nigerian ladies provided the Asians an opportunity to take the lead, which they held on until the interval.

The Christopher Danjuma tutored girls had to dig deep from their arsenal to force the more technically balanced Chinese side to a one all draw.

All hopes seemed to have been lost but the Falconets kept on the pressure, and one of those anxious moments for the Chinese resulted in a back-breaking equaliser in added time through Capt. Ajibade.

The goal sent Nigeria to the quarter finals and a date with Group C winners, Spain on Aug. 16. /(NAN)