Grieve As Speeding Bus Crushes Hawker to Death in Lagos 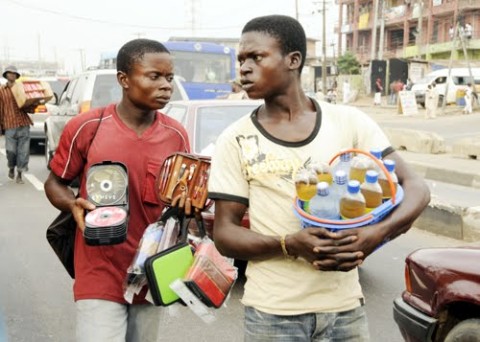 Passersby, commuters and residents of Jungle area along the newly-constructed Yaya Abatan – College road, in Ifako Ijaiye local government area of Lagos state were on Tuesday night thrown into grieve and tears as a speeding commercial bus crushed to death a young boy.

Eyewitness told African Examiner that the driver of the bus was being trailed from Ogba, an outskirt of Lagos, by the officers of Lagos state Traffic Management Authority (LASTMA) and as he attempted to cross the culvert demarcating the road to the other side, in order to escape being arrested, rammed into the boy who happened to be one of the hawkers (of cashew nut) on the long and ever congested road.

The bus overran the late boy head, making his skull to gush out at a spot which is a few meters to the Iju road police station.

African Examiner could not however confirmed what became of the bus driver, yet saw the team of policemen believed to be from Iju police station, trying to clear the remains of the victim whose mangled body and head have been covered with leaves as well as the damaged bus from the road.

The incident occasioned a very long traffic snarl, to the extent that most motorists had to divert to the alternative in-built roads in the area to continue their return journey after the day’s work.