I Will Not Give Lagosians Low Cost Houses-Fashola

Lagos State Governor, Mr. Babatunde Fashola says he never promised to and will not give Lagosians low cost houses. 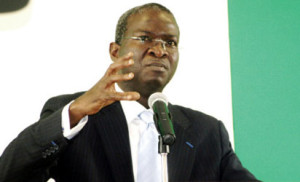 He spoke at the 3rd Public Draw of the Lagos Homes Ownership Scheme, HOMS in which 76 new home owners emerged in Lagos, Nigeria on Wednesday.

He said when he took over as governor in 2007, he never promised to give Lagosians low cost houses, but affordable houses, which is what he is doing under the Lagos HOMS.

Reiterating that the state government believes that the citizenry irrespective of their social status deserved the best, the governor said it would be unfair to describe any class as “low cost people”.

“We did not promise low cost, we promised affordable houses. Our opponents are too preoccupied with the embarrassment of their own failures that they are accusing us of what we did not promise.”

Fashola said a number of practical painstaking steps have been taken by his administration to ensure that the homes are affordable in every respect.

“It is affordable because the interest rate will not exceed 9.5 percent whatever happens to the Nigerian economy. Every mortgage payment you make every month is not into a bottomless pit but towards owning your own home”, he said.

He said the present administration has also taken practical steps to make the houses very affordable by putting a 25 percent discount on it after calculating the cost of the building and the land.

The Governor explained that his administration decided from the outset on the practical solution to the housing issue against the backdrop of current realities.

He maintained that the public draws process is just the beginning with a little over 31 emerging in the first draw and about 37 being successful in the second draw and that as the administration did promise to put 200 homes on the draws monthly, it is doing so without failingly.

“We have unfailingly complied with our commitment. We will continue to do whatever it is not to break that commitment. So month after month for the third month running, we have held these draws and incrementally winners are emerging”, he added.