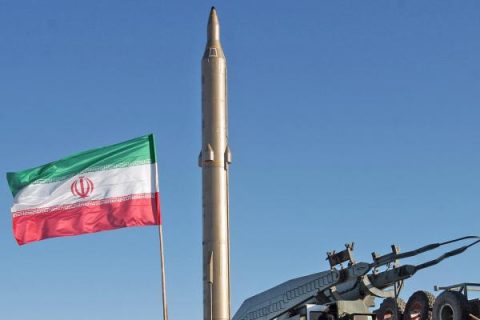 (AFRICAN EXAMINER) – Despite the UN ban, Iran claims it has successfully tested a new-medium range missile.

The launch of the Khoramshahr missile, which has a range of 2,000 km (1242 miles), was shown on state TV. The time of the test was not clear.

US President Mr. Donald Trump on Tuesday at the UN General Assembly Debate criticized Iran’s missile programme and the 2015 nuclear deal with the country.

Iranian President Hassan Rouhani Friday announced that Iran would increase its military power “as a deterrent”.

The Khoramshahr missile was first displayed at a military parade on Friday in Tehran. It is reportedly capable of carrying multiple warheads.

He said: “The ability to evade the enemy’s air defence line and to be guided from the moment of launch until the target is hit turns Khoramshahr into a tactical missile”.

Iran would “not seek permission from any country for producing various kinds of missile”, the Minister added.

It would be recalled that the US announced fresh sanctions on Iran in July over its ballistic missile programme and what it said was Iran’s support for terror organizations.

It also imposed sanctions on Iran after a ballistic missile test in January. It says such launches violate the spirit of the 2015 agreement between Iran and six world powers to limit its nuclear programme in exchange for sanctions relief.

In his reaction to the verbal attack by Trump, Mr. Rouhani responded by referring to Mr. Trump as a “rogue newcomer to international politics” and deplored the US leader’s “ignorant, absurd and hateful rhetoric”.

Rouhani vowed that his country would “not be the first” to violate the deal, which Mr. Trump has threatened to pull out of despite other signatories and international monitors saying Iran has stuck by its terms.