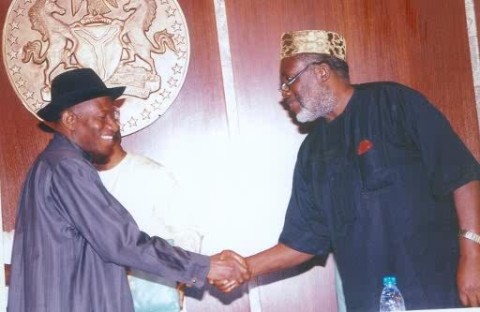 The youth wing of the apex Igbo socio- cultural organisation, Ohanaeze Ndigbo has declared a serious war on the leadership of its parent body apparently over an undisclosed cash gift President Goodluck Jonathan gave them during their recent visit to the presidential villa, Abuja. 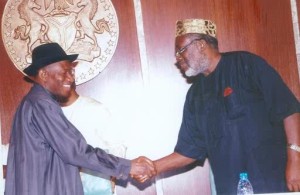 One of the Ohaneze leaders in handshake with President Goodluck Jonathan

Our correspondent gathered that the youth wing of the Igbo umbrella body  are disgusted over the non-inclusion of their members and other Igbo interest groups on the delegation that met with Jonathan at the state House Abuja recently.

The aggrieved youths, however, accused the chief Garry Agarieweh led Ohaneze Ndigbo of going to Abuja to represent their pockets and not the Igbo race.

African Examiner gathered that immediately news of the visit to the president filtered into the ears of the youths, they approached some principal officers of the parent organization, such as the Secretary -General, Dr. Joe Nworgu for them to be allowed to have a representative on the delegation.

But Nwaorgu who was said to be annoyed with the effrontery of the youths to demand for a representative on the delegation to Aso Rock had told them to wait patiently for their turn or kill all the elders of the organization and assume their position if that will satisfy them.

Our Correspondent learnt that the unpleasant response of the secretary General to the youths, worsened the situation, as they are now spoiling for war with leadership of the parent body.

Some of the youths who spoke to African Examiner in Enugu, but do not want their names in print, had described the present Ohaneze leadership as a total failure, saying they are only interested in their personal pockets, and not the general well-being of Ndigbo, (Igbo people).

They vowed that “Ohanaeze Ndigbo leadership will no longer have their way in such outing in the future” insisting that they must consult relevant interest groups in any matter of Igbo interest henceforth.

According to a leader of the youth wing, “Our elders hardly think of the future and this is why the Igbos have not made much progress in the politics of Nigeria.

“How can Ohanaeze Ndigbo prepare a list of delegates to meet with the president without a single youth? What does this tell you? We met with the secretary General, Dr. Joe Nwaorgu to make the issue known to him, but he told us to wait for our turn or kill all the elders if that will satisfy us. We are not happy the way our elders are going.

“This kind of meeting between the president and Igbo leaders should have included youths, clergy or representatives of other Igbo cultural groups because whatever that would be discussed will be in the interest of Ndigbo. The elders cannot know it all; the inputs of youths or women would still be needed.”

Another member of the youth wing who pleaded anonymity advised the leadership of Ohanaeze Ndigbo to borrow a leaf from their Arewa in the North or Afenifere in the west counterparts, which he said, cannot take any major decision without consulting their youths.

“The worst part of it is that it is still the same old people, Justice Ozobu, Prof. Anya, Joe Nwaorgu, Joe Irukwu and Mbazulike Amaechi who are always meeting with the president on behalf of Ndigbo. What has Ndigbo benefitted from such meetings? Even if it is for the Ndigbo to back Jonathan in the 2015 election, how many of the elders who were part of the delegation will be there to mobilise and vote for Jonathan on that day?” He asked