Jubilation In Kwara Community As Indigene Wins US Congress Election 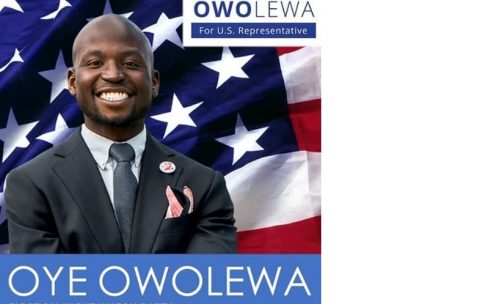 (AFRICAN EXAMINER) – There was wild jubilation in Omu-Aran community of Kwara on Wednesday as its indigene, Adeoye Owolewa, was declared winner of the U.S. Congress election for Columbia District.

The residents, especially members of Igangu family where Owolewa hails from, embarked on celebration across the metropolis as news of the election victory filtered in.

Scores of residents had besieged the Igangu compound of Owolewa as early as 10 am on Wednesday to felicitate with the family over the election victory.

NAN gathered that the results for the District OF Columbia congress election showed that Owolewa of the Democratic Party polled 135, 234 votes representing 82.65 per cent of the total vote cast to defeat his closest rival Robinson-Paul Joyce of DCG, who scored 15, 541 votes.

With the victory, Owolewa becomes the first Nigerian to be elected into the U.S. Congress.

The Olomu of Omu-Aran, Oba Abdulraheem Adeoti, described Owolewa’s victory as unprecedented in the history of the community.

According to him, it is not only an historical landmark for Omu-Aran, but Kwara and Nigeria as a whole.

“This is an unprecedented thing of joy for every son and daughter of Omu-Aran, Kwara State and our dear country, Nigeria.

“We are happy that our son, Adeoye Owolewa, has put the name of the community, Kwara State and Nigeria on the world political map in a positive way.

“Our prayers are that God will bestow on him His divine wisdom, guidance and protection to excel in his new assignment so as to continue to promote our image positively,’’ he said.

According to Adebayo, a former Acting Managing Director of NAN, the election victory is a reflection of the high level of exposure and capabilities of Nigerians in the global political arena.

“It’s historical and heartwarming for Omu-Aran, Kwara and more importantly Igangu compound where Owolewa hails from to have produced the first Nigerian-American democratically elected representative into the U.S. Congress.

“We are more elated by the fact that the said election is very unique as it is for the Columbia District in Washington DC, the famous capital of the U.S,’’ Adebayo said.

Alhaji issa Abdulsalam, an Islamic cleric and uncle of Owolewa, described the election victory as a prayer answered.

“Though we were far away from the election but we were with him (Owolewa) in prayers and today we can celebrate because Almighty Allah has answered our prayers,’’ he said.

Sharing the news of his election victory on his Facebook page, he wrote: “Good morning.
”Looks like we did it! I want to thank everyone, from family and close friends to DC residents.

”Because of your contributions and sacrifices, I stand before you as America’s first Nigerian-American congressman.

“In this role, I’m going to fight for DC statehood and bring our values to the lawmaking process.

”While today is a day for some celebration, the hard work also follows. Again, thanks so much for everything. I wouldn’t be here without you.”