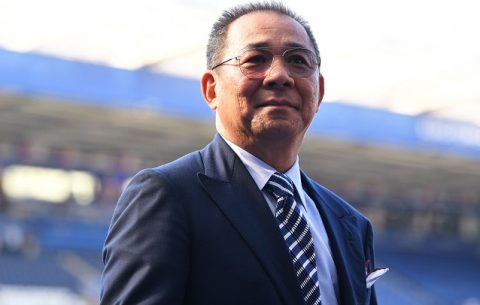 (AFRICAN EXAMINER) -The funeral of Leicester City’s owner Vichai Srivaddhanaprabha who died in a helicopter crash outside the club’s stadium held Saturday in Bangkok, Thailand.

The funeral began with Buddhist bathing rituals at a temple in Bangkok, and was followed by recitation ceremonies over seven days.

Leicester City players are due to fly out to Thailand for the funeral later after their game against Cardiff.

The club Manager, Manager Puel said Thursday that the Saturday match, the first after the incident was not really about the result, rather to honour the late Chairman.

Srivaddhanaprabha died with two members of his staff, the pilot and a passenger when the helicopter crashed.

The flight came down moments after taking off from the King Power Stadium last Saturday, October 27.

A bathing rite ceremony was held. This was followed by the beginning of the recitation ceremonies.

Reports said the ceremony was being held behind closed doors and elements of status at the funeral were very important.

“You will see during the funeral artefacts given by King Vajiralongkorn – a special funeral urn and also a five-tiered umbrella that is very high status – being used,” he said.

He added: “People will watch the funeral in many ways to see how well thought of Vichai was.