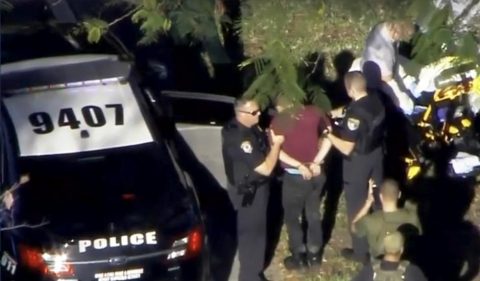 The suspect, a former student, was taken into custody “after he committed this horrific, homicidal, detestable act,” Broward County Sheriff Scott Israel said. Law enforcement sources told CNN that the suspect has been identified as Nicolas Cruz.

Law enforcement responded to reports of a shooting at the school shortly before 3 p.m. The shooting sent students and staff streaming out of the school in a panic.

Immediately after the shooting, aerial footage from CNN affiliate WSVN showed people lying on the ground outside the school, being treated for injuries and moved to ambulances.

Freshman Kayden Hanafi said he heard two gunshots and saw people running out of another building on campus. As he and his classmates went into lockdown in a classroom, many thought the noise might have been firecrackers.

“It’s really a blessing to still be alive,” he said.

“We have been liberated. God bless, America,” Aidan tweeted after being evacuated from the building. “Love each other. You may never know when it may be the last day you meet someone.”

There had been a fire drill at the school earlier in the day, leading some to believe at first that the afternoon incident was another drill, a student told CNN affiliate WSVN. “Everyone just started freaking out.”

“But then word started going around that it was shots and not just, like, something else, everyone just started running towards the canal,” the student said./CNN