Neymar Out of The World Cup for Brazil 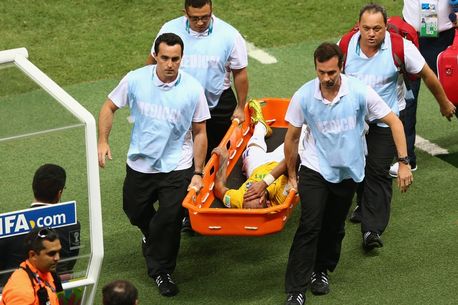 Brazil have been dealt a major blow in their attempt to win the World Cup with news that star forward Neymar is OUT.

The No.10 was stretchered off in the quarter-final win over Colombia in tears and raced to hospital. 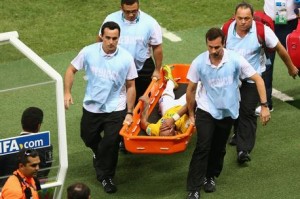 A few hours later team doctor Rodgiro Lasmar confirmed the Barcelona man would not be allowed to play any more football, after suffering a fractured vertebrae.

Big Phil Scolari had previously suggested his star man would have to sit out the semi-final with Germany.

“I think Neymar won’t be able to play,” he said. “Everyone knows he’s going to be hunted, for three matches that has been happening.

“We are in a situation which is very difficult for the match against Germany. We are not very hopeful, if we are able to beat Germany it might be he can play in the final.

“He has been sent to a private clinic for a serious of exams as he was kneed on his lower back and was crying out with pain. I can guarantee it won’t be easy for him to recover based on what the doctor told us and the pain he is in.”

And now Lasmar had confirmed what all Brazilians were dreading; Neymar will have to watch from the stands for the rest of the tournament.

Brazil will also definitely be missing Thiago Silva for the clash with Germany on Tuesday – the defender sits out with a suspension for a yellow card picked up in Friday evening’s win.