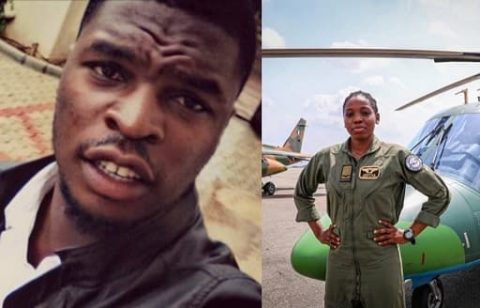 (AFRICAN EXAMINER) – The dust raised by the shocking death of the Nigerian first female combative Flying Officer, Tolulope Arotile, is yet to settle, as the country’s Air Force reveals the identity of the driver of the car which hit the young and promising officer.

The NAF Director of Public Relations and Information, Ibikunle Daramola at a briefing Sunday, in Abuja, identified the hit man as Mr Nehemiah Adejoh. It was established again at the briefing that Adejoh is Late Arotile’s ex-classmate.

While confirming that the matter would be subsequently handed over to the Nigeria Police Force, the NAF image maker indicated that details of the circumstances surrounding the death of the 24-year-old combat pilot have been communicated to her family.

Giving a report of a preliminary investigation carried out, the NAF spokesperson said the late Arotile

Daramola pointed out that the preliminary investigation has shown that the late pilot on the fateful day met three of her former schoolmates at the Air Force Secondary School now Air Force Comprehensive School, Kaduna.

The NAF Spokesman explained that Adejoh, Mr. Igbekele Folorunsho and Mr Festus Gbayegun, drove past her in a Kia Sorento SUV, with Registration Number AZ 478 MKA.

“It is noteworthy that Messrs Adejoh, Folorunsho and Gbayegun are all civilians who live outside NAF Base Kaduna, but were on their way to visit one Mrs Chioma Ugwu, wife of Squadron Leader Chukwuemeka Ugwu, who lives at Ekagbo Quarters on the Base’’ Daramola stated.