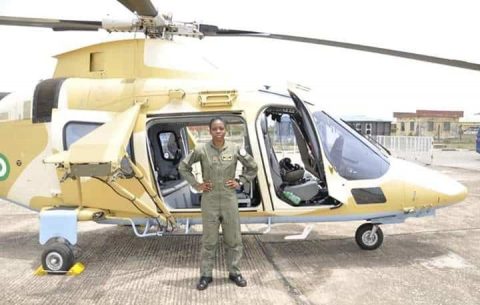 According to the memo published by the Nigerian Airforce, Arotile died on Tuesday from head injuries after a road traffic accident at NAF Base, Kaduna.

African Examiner reports that Arotile hails from Kogi State and was commissioned into the Airforce in September 2017.

The Chief of Air Staff, Air Marshal Sadique Abubakar, has described the death of Flying Officer, Tolulope Arotile as a huge loss to the Nigerian Air Force family and indeed the country.

While extolling her virtues, the Chief of Air Staff described Arotile as “a very intelligent, disciplined, confident and courageous young officer who added value wherever she served.”

“I recall meeting her at the Minna Airport, while on operational visit, after one of such missions and seeing her eagerness to contribute towards the restoration of lasting peace to the affected areas. Her death is a huge loss to the Nigerian Air Force family and indeed the entire Nation.

President Muhammadu Buhari received with deep pain the passing of Flying Officer, Tolulope Arotile, condoling with the family on loss of such a promising officer, whose short stay on earth impacted greatly on the nation, especially in peace and security.

The President salutes Arotile’s bravery in the field to protect the country from onslaught of bandits and terrorists, assuring that her memory will be indelible, and her efforts remembered.

President Buhari prays that the Almighty God will receive the soul of the departed, and comfort the family she left behind.