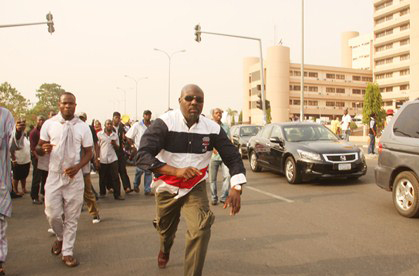 Spread the love
By Eric Ojo
Africa Network for Environment and Economic Justice (ANEEJ), a Benin-based non-governmental organization (NGO) has condemned the arrest of Dino Melaye by men of the Nigeria Police Force while protesting against the Minister of Aviation, Ms Stella Oduah over the purchase of the two BMW armoured cars. 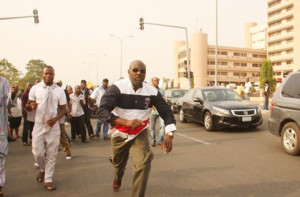 Dino Melaiye, during a protest in abuja

Describing the arrest as an attempt to stampede oppositions and intimidate the voices, the group called for the immediate release of Melaye, a former member of the House of Representatives who was arrested by the police when he led a group of protesters to the Federal Secretariat, Abuja calling for the sack of the Aviation Minister over the N255M cars scandal.

“Drama ensued during the protest as another group emerged from nowhere to stage a counter protest to drum up support for the minister. The police arrived at the scene and promptly arrested Dino Melaye’s group. They were taken away in a Toyota Hilux van, ANEEJ said in a statement signed by its the Executive Director, Reverend David Ugolor.
The group lamented that the Federal Government continues to act as if, it is oblivious of the implications of every step it takes in the governance of Nigeria, warning that it is high time the government became very mindful of the fact that the world is watching.
“But what the government does not understand is the fact that the international community is watching every step they take. Just at a time when Nigeria just submitted her report to the Human Right Council proclaiming the nations progress report on human right, a citizen is being arrested for protesting against corruption in the land, I weep for this nation”, it added.
ANEEJ therefore called on President Goodluck Jonathan to prevail on the police to ensure immediate release of Melaye from their custody, adding that the Aviation Minister should resign immediately or sacked.