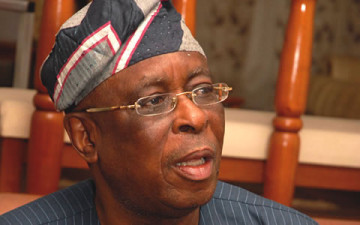 Former Governor of Ogun state and delegate at the ongoing national conference, Aremu Olusegun Osoba has called for devolution of power from Federal government. 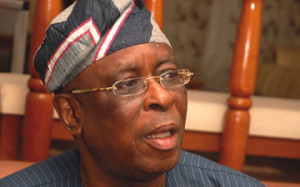 Osoba made this call in his address at fund raising dinner for building of Nigerian Guild of Editors held at Transcorp Hilton Hotel, Abuja.

He said there must be devolution of power from federal government to ensure national development.

“75 per cent of delegates at the ongoing confab are in support of devolution of power. There is a reasonable consensus on that issue that we cannot continue to have a federating system of government. The so called federating states are too small to engage the federal government which collects 52 per cent revenue.”

Also speaking at the event, Edo state governor, Comrade Adams Oshiomole advised nigerians to work for national unity. ” We are all nigerians, nobody can develop our country for us, we must develop Nigeria ourself. Nigeria unity must be our priority”. He added.

Minister for Information, Labaran Maku described Nigerian Media as the freeest media in Africa continent,  urging media practitioners not to abuse the freedom they are enjoying.

“If we continue to run down our country when we go out we suffer it because people look at us with the impression they get from what they read.”He added

The President, Nigerian Guild of Editors, Femi Adeshina  said his executives were determined build a fitting secretariat to the Guild which will not only serve as a functional office for the Guild but will also be equipped with modern ICT facilities and meeting rooms for the purpose of building the capacities of Nigerian editors.