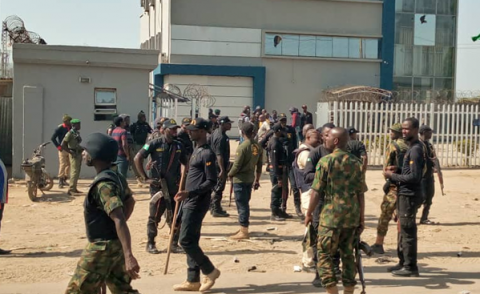 (AFRICAN EXAMINER) – Armed robbery operation at a new generation bank in Mpape area of Abuja Saturday afternoon, was foiled by the operatives of the Federal Capital Territory (FCT) Police Command.

Report said during the gun battle, combined police and soldiers shot one suspect and arrested four others inside the banking hall.

The suspected armed robbers were reportedly demobilized hours after the security operatives’ arrival who, immediately surrounded the building.

It was gathered that when the suspected robbers refused to surrender their weapons and come out of the bank, the police operatives forcefully entered the banking hall, swoop on the gang members, in the process, shot and killed one of them.

Meanwhile, the FCT Police Command has confirmed the failed operation.

The Commissioner of Police (CP), Mr. Bala Ciroma, in his response said: “It is a foiled bank robbery; We stopped the robbers from raiding the bank. Four men were arrested while a suspect was killed’’.

“Investigation has commenced to determine how they entered the bank and other things’’ the CP was quoted.

Following the incident, huge crowd trooped to the scene, causing traffic around the area, which is closed to the Maitama Sule District.