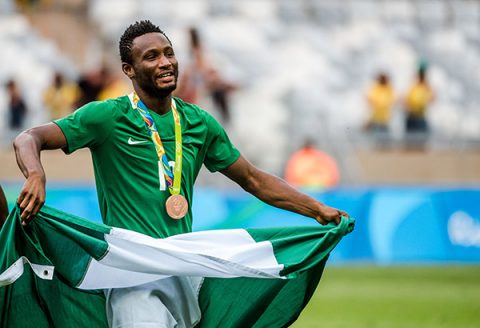 ABUJA, NIGERIA (AFRICAN EXAMINER) – Senate President, Bukola Saraki, on Saturday celebrated with Nigeria’s Dream Team VI for winning the bronze medal in the men’s football event at the Rio Olympics and called on Sports authorities in the country to embark on honest reappraisal.

Saraki in a statement by his Special Adviser on Media and Publicity, Yusuph Olaniyonu, in Abuja, also congratulated Nigeria for the feat achieved by the team.

He extolled the doggedness of the Coach Samson Siasia-led boys and their ability to bounce back from defeat to claim a bronze medal for the country.

Saraki said: “I am excited about this last minute redemption of the nation’s pride by the Dream Team VI. The game against Honduras was no doubt a make or mar cracker. But we are happy to have emerged victorious. Thanks to the team and their technical crew.

“You have made the country proud by winning the third place match against all odds and we are proud of you and your superlative outing. All those who prayed and supported the team to the end also deserve special commendation. We were not disappointed,” he said.

Saraki noted that the fact that the nation’s delegation did not perform as expected in the Rio Olympics Games billed to end on Sunday should not be a reason to engage in a blame game.

Rather, he urged sports authorities in the country to immediately put their house in order and ensure that the country’s athletes have better preparations for the next Olympics and other major sports meets in the world.

“We must immediately reappraise our participation and ensure that the factors that set us back in the various events are identified and immediately redressed in order to aid our planning and preparation for the next edition of the games,” he said.