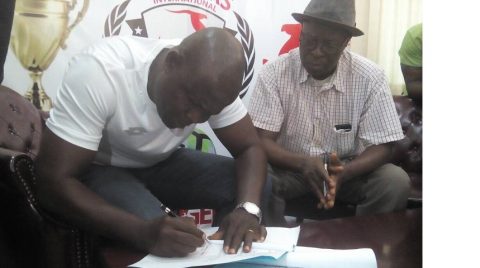 Photo: Gbenga Ogunbote signing his contract as the new Technical Adviser of the Rangers Int’l FC.

African Examiner Sports reports that Ogunbote, was unveiled at the Enugu government House alongside his Assistant, Abimbola Lawal, and the new General manager of the club, Davison Owumi.

The state Commissioner for youth and Sports, Joseph Udedi, had few hours before before the unveiling to Sports writers presented the new Rangers handler to governor Ifeanyi Ugwuanyi and members of the state executive council.

Speaking with sportswriters, the new Rangers Technical Adviser, said he is not unaware of the task ahead of him, saying “you know, Rangers is a household name and popular brand  in Nigeria football so, it is a privilege for me to be here.”

He promised to return the flying Antelopes to the winning ways, saying “my target any where I work is to get the club to an appreciable level. I don’t need anybody  to set a target for me, because I know where i’m going.

Recalled that Rangers won the 2015/2016  edition of the Nigeria professional football  league NPFL, but failed to defend the title last season.

However, following its  abysmal performance, last season, the state governor, Ugwuayi, dissolved the management and Board of the club.

Owumi, a former chief executive officer of the team, had expressed delight over his second home coming to Rangers, assuring the government,  teeming fans and supporters of the club of their readiness to deliver,  stressing that “we are going to work as a team, and God’s willing, we will not let the governor and stakeholders down.”

The new  boss of the club added: “what we have in mind is to build a professional foundation for Rangers through the support of all key stakeholders, including the press. We will welcome constructive criticism from the media, but would like to work with those who will proffer solution to our problems rather than criticism at all time.

Owumi, who is also an ex- Rangers player, was a one time General manager of relegated Warrior Wolves.