Terrorism: Gunmen Kill about 28 in Attack on Christians in Egypt 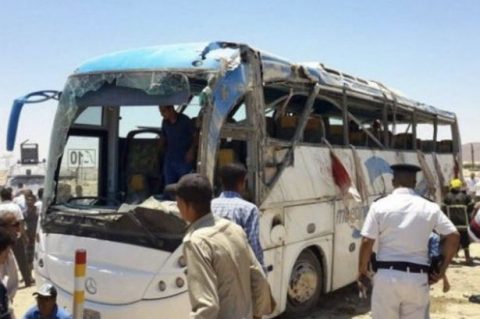 The Egypt tragedy occurred in Minya province, about 220km (140 miles) south of the capital Cairo, the Egypt’s capital, as the bus headed to the Monastery of St. Samuel.

There have been a number of attacks on Copts in recent months the responsibility being claimed by Islamic State (IS) militants.

The Coptic Orthodox Church is the main Christian Church in Egypt. While most Copts live in Egypt, the Church has about a million members outside the country.

It would be recalled that two suicide bomb attack targeting churches on April 9, left 46 people dead.

The tragic attacks prompted President Abdul Fattah al-Sisi of Egypt to declare a nationwide state of emergency and promise to deal with the attackers.

Copts believe that their Church dates back to around 50 AD, when the Apostle Mark is said to have visited Egypt.

The head of the Church is called the Pope and is considered to be the successor of St Mark. This makes it one of the earliest Christian groups outside the Holy Land.