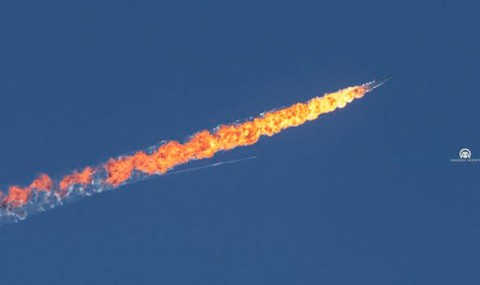 Turkish Military has allegedly shot down a Russian Military aircraft on the Syrian border.

Confirming the development, Russian Defence Ministry, said a Su-24 had crashed on Syrian territory after being fired from the ground.

In contrast, the Turkish Military officials, in reply said the country’s F-16s shot down the plane after persistent warning to the Russian two pilots that they were encroaching on Turkish airspace.

Reports indicated that the pilots were ejected before the crash in Latakia province; still, the Syrian rebels claimed one of the two is dead.

The latest development is the first time a Russian aircraft will crash in Syria territory, since Moscow, a Syrian ally, launched offensives against the opponents of President Bashar al-Assad, including ISIS terrorists in late September.

Kremlin spokesman Dmitry Peskov declared that the incident as “very serious”, yet, cautioned that it was too early to draw conclusions.

Also reacting, NATO Military alliance, which Turkey also belongs, said the situation was being “closely” monitored and was in contact with the Turkish authorities. The Force also hinted that there would be an “informational meeting” of ambassadors in Brussels by (16:00 GMT).