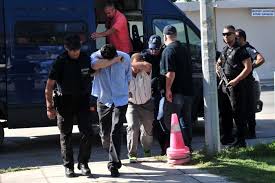 Similarly, a total of 6,000 members of the judiciary and military, including generals, have been detained.

Turkish President Recep Tayyip Erdogan amidst the coup confusion has vowed to purge state bodies of the “virus” which occasioned the revolt.

It would be recalled President Erdogan said Sunday that Turkey would consider reinstating the death penalty, which was a suggestion initially met with strong opposition from the EU leaders.

The US Secretary of State, John Kerry, in his reaction to the failed coup stressed the importance of democratic rule.

Speaking in Brussels where at a meeting with the European Foreign Ministers, Mr. Kerry opened up that the US stood squarely on the side of the elected leadership in Turkey saying: “We will certainly support bringing perpetrators of the coup to justice – but we also caution against a reach that goes well beyond that.”

Reacting to possible recourse to the capital punishment, the EU’s Foreign Affairs Chief, Federica Mogherini warned “No country can become an EU member if it introduces the death penalty,” said
Also, a Spokesman of German Chancellor Angela Merkel said such a move would spell an end to Turkey’s longstanding, as well as stalled, application for EU membership.

It would be recalled capital punishment was abolished in 2004 as part of Turkey’s bid to join the bloc. There has been no case of execution in the country since 1984.

Meanwhile, Turkish Prime Minister Binali Yildirim said the total 208 “martyrs” had lost their lives during the foiled coup, including 60 police, three soldiers and 145 civilians. He added that a total of 1,491 people were also injured.

PM Yildirim however put the number of rebels in the aborted coup killed at 24.

According to the State media, 232 suspected coup plotters are in detention; 232 people killed – including 24 rebels; 1,491 wounded; 103 generals and admirals arrested; 2,389 soldiers detained; 2,745 judges and prosecutors detained while 8,777 Interior Ministry officials have been suspended.

The failed coup featured heavy gunfire in the capital Ankara; Istabul and other places.