UBA Wins Big at The Bankers Award; Crowned African Bank of the Year 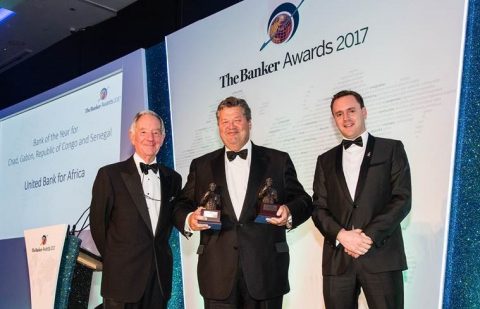 (AFRICAN EXAMINER) – Pan-African financial institution, United Bank for Africa (UBA) Plc has once again proven its leadership on the continent, as the Banker Magazine crowned UBA the “African Bank of the Year 2017”. This Banker Award is premier for Nigeria, as it marks the first time a Nigerian-headquartered bank will be winning the prestigious and highly coveted regional award.

To further demonstrate the group’s strength and dominance in the financial sector on the continent, four of UBA Group’s operations in Africa also led contenders in their respective countries to emerge the Best Bank of the Year 2017 in their respective markets. UBA Congo, UBA Tchad, UBA Gabon and UBA Senegal emerged the Best Bank of the Year in Congo, Tchad, Gabon and Senegal, reinforcing the strong franchise of the Group across its chosen markets in Africa. Notably, UBA Gabon and UBA Senegal won the same awards in 2016, as both subsidiaries of UBA Group remain the Banks to beat in Gabon and Senegal.

A publication of the Financial Times Newspaper, The Banker Magazine is a global financial intelligence magazine that provides global bank ratings/analysis and it is the definitive reference in international banking for high level decision makers globally. According to the magazine, the aim of the award “is to highlight industry wide excellence within the global banking community. The winner is selected from participating banks in each of the 120 countries from which entries are received for the competition.”

Explaining the rationale behind UBA carting multiple categories in its December issue, the Banker’s Magazine noted that Africa’s economic landscape has been unpredictable in recent times which resulted in recession in some of Africa’s best performing economies, while the region as a whole only expanded by about 1.3% in 2016. “In these conditions only the most diversified and innovative of regional banks can prosper. And this is precisely why the United Bank for Africa (UBA) has scooped the 2017 regional winner award. For one, the lender registered impressive top- and bottom-line growth over the review period,” it noted.

The magazine went further to enumerate the various achievements recorded by UBA group during the period, noting that earnings for the year reached N384bn ($1.07bn) signalling 22% growth from its 2015 performance while profit before tax also grew, by 32%, to reach N91bn. According to the organisers, “Equally impressive is UBA’s capital adequacy ratio which, at the end of 2016, stood at 20%, while its nonperforming loan ratio was a healthy 3.9%. Operating across 19 markets in Africa, the bank serves more than 14 million customers.”

It added that the Pan-African bank’s foray into various ventures in Africa also helped to clinch its activities in the year under consideration, stating, “Beyond the numbers, the bank has won and acted on a number of headline deals. These include the financing a new stadium in Douala, Cameroon, for the 2019 Africa Cup of Nations for $285m. In Senegal, more than $250m of trade finance was provided to the state oil company, while the lender acted as arranger and bank agent in the raising of $160m to finance road infrastructure. The bank’s digital tax collection solutions are also helping regional governments in Senegal and Burkina Faso.”

The organisers noted that UBA is making impressive strides in the digital space, adding that in terms of internet banking, the organisation processed 7 million transactions valued at more than N600bn in 2016. Mobile banking processed transactions valued at N70bn over the same period. UBA has also launched eMailMoni, a service that lets customers transfer funds via e-mail, while Chat Banking allows clients to perform basic transactions through social media platforms. “For these reasons, and others, UBA is the winner of our 2017 African Bank of the Year award,” the Magazine stated.

The Group Managing Director/Chief Executive Officer, UBA Plc, Mr. Kennedy Uzoka, who was delighted by the recognition from The Bankers said; “These awards mark another milestone for UBA Group and is a testament of the diligent execution of the bank’s strategic initiatives on customer service. Being recognized as Africa’s best bank complements positive feedback from customers and is a recognition of our improving efficiencies, service quality and innovation. I therefore dedicate it to our growing loyal corporate and retail customers, who are our essence. Given our heritage commitment to Africa’s development, we continue to impact lives through our service as well as funding to individuals, businesses and government.”

Uzoka added; “The bank remains focused on its goal of democratizing banking in Africa, leveraging on new technologies and our rich pool of talent. It is satisfying that our efforts towards leadership are yielding great results. We continue to gain market share across our chosen markets, as we deepen financial inclusion, meeting basic and complex financial service needs of the growing African population. We are Africans and determined to change the narrative of financial services in Africa and this is just the beginning,” he noted.

On his part, Mr. Emeke Iweriebor, Regional CEO, UBA Francophone Africa, described the awards as exciting, stating that the bank’s great work in Africa is increasingly being recognized.

Iweriebor who dedicated the awards to the bank’s esteemed customers, said “Our pioneering innovations in the African banking sector are undoubtedly critical to the growth and development of the continent. Africa’s banking sector has come a long way but we still have a lot to do. We at UBA Group are dedicated to being a critical part of this transformation.”

He added that the bank will continue to leverage its local knowledge, global exposure as well as presence to drive positive change in Africa, working actively with the government, local businesses, regulators and other stakeholders in deepening financial services.

The Banker “Bank of the Year Awards” are widely regarded as the Oscars of the Banking Industry.  For 90 years, The Banker has been the world’s leading monthly journal of record for the banking industry.  The organisers note that the aim of the awards programme is to highlight industry wide excellence within the global banking community.

The Banker selects one winning bank for each of the 120 countries that are covered. Over 1,000 applications are entered and judges select winning banks based on the ones that have made most progress over the past 12 months.

UBA was incorporated in Nigeria as a limited liability company after taking over the assets of the British and French Bank Limited who had been operating in Nigeria since 1949. The United Bank for Africa (UBA) Plc merged with Standard Trust Bank in 2005 and from a single country operation founded in 1949 in Nigeria – Africa’s largest economy – UBA has become one of the leading providers of banking and other financial services on the African continent. The Bank provides services to over 14 million customers globally, through one of the most diverse service channels in sub-Saharan Africa, with over 1,000 branches and customer touch points and robust online and mobile banking platforms.