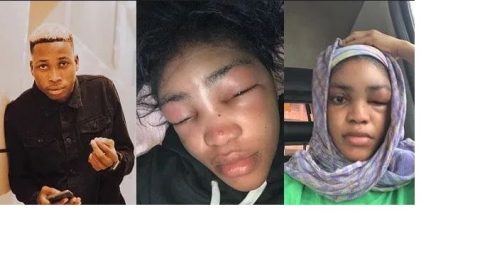 This was disclosed on Monday by her brother, Michael, who also doubles as her manager lamenting that Lil Frosh, who is signed by Davido since June this year.

He writes: “@thacutegeminme my client and sister has suffered enough!!! We have kept quiet enough @lhilfrosh. You have done enough damage for almost a year now you have been in a relationship with my sister and client and you have brought her nothing but horror, pain and disaster.

“I remember the first time I found out about you beating her on Monday 22nd of June @official_lyta team reached out to me wanting to use her for his musical video shoot but she kept on saying you didn’t like it not knowing you had beaten her to pulp and she couldn’t face the world with so much bruise. Their team begged to double the money but she couldn’t take the job because of you.

“You created so much fear in her till she turned down the job, but you still didn’t stop on a particular day you called me and you were begging me for almost 3 hours on the phone telling me to talk to her just to get back to you. Which I begged her and you promised never to lay your horrible hands on her.

“You never wanted her to be friends or to even talk to anyone. You will turn the lights off beat her and pour her water even record her and threaten to post it online. You broke her ring light. Broke her phone

“Dragged her right infront of your house. I know how many times I’ve had to order Uber to take her home.

@lhilfrosh you are very wicked. I’m tired of trying to protect your image while you continually ruin her and break her into pieces. She called one day crying that you were going to kill her and actually you were truly locking her inside preparing to beat not until I called her mom. You even recorded her naked!! Threatening to post it after beating her bro @lhilfrosh you better be ready. You will pay for this !!!”

This development elicited reactions on social media as some Nigerians took to the micro-blogging platform to condemn both the singer and the brother.

African Examiner brings some of these views

IFA FUNSHO@funshographix writes: “The Fame Lil Frosh could not get as an area boy singer in Lagos, Nigeria. he just achieved it by beaten his girlfriend badly.”

TÍMÍ OF ÀWA-IJEBU@Kitimmys_Khay writes: “But how did Lil Frosh beat this girl like this

Mr Romeo@goonZzero writes: “Someone tell Lil frosh this is not what we meant when we say hit for hit.”

Williams_ex@williams_ex writes: “Love is blind Lil frosh you are a bastard You must me arrested today!!!!”

My tweets are underrated@Undone_rice writes: “Lil frosh wants to sink his own career even before it kicks off.”

Nene @Deeee_Vaaaaa writes: “The number of times lil frosh hit his girlfriend is higher than the number of hit songs he has.”

Famez Venom @Famezz_vv writes: “The brother said “he has been protecting Lil Frosh image” TF!! You’re protecting the image of someone that is boxing your sister?? Even Anthony Joshua go fear Lil Frosh if he sees the pictures.”

YH @Yemihazan writes: “Somebody was beating your sister rather than call the animal out you were protecting his image. what image does lil frosh have?? The babe brother sef deserve flogging.”

Port Harcourt Daddy@TukaLoanyie writes: “You see that boy with saw dust on his head? His name is Lil Frosh, he does not have a hit song, but he can hit women.”

Iconic Grayzo@officialgrayzo writes: “While his mate are saying #EnoughIsEnough lil frosh is busy designing someone’s daughter face like this, Pele o Agbagba firiyoyo You just end the career that has not started.”