US Killing: Five Policemen Killed In Anti-Shooting Protest In Dallas 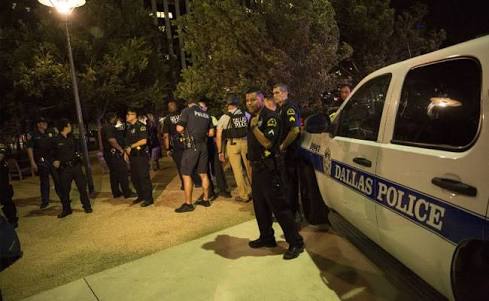 BALTIMORE, MD (AFRICAN EXAMINER) – Five Dallas Police officers have been killed, six wounded by gunmen during protests against the shooting of black men by Police.

Following the altercation, three people are already in the custody, while another man in a stand-off with the police shot himself dead.

The protests followed the deaths, earlier this week of Philando Castile in Minnesota and Alton Sterling in Louisiana.

Gunfire first broke out at around 20:45 local time Thursday (01:45 GMT Friday) as protesters marched through the Dallas city.

This week’s attack experience was the deadliest in the history of US law enforcement officers since the 9/11 attacks in 2001.

President Barack Obama in his reaction said the attack was a “vicious, calculated and despicable attack on law enforcement”.

Obama reiterated that the entire city of Dallas was grieved and the “tight-knit US Police community feels this loss to their core”.

Similarly, the Dallas Police Chief, David Brown alleged that the suspects were all believed to have been working together, using rifles to carry out attacks while the protest rally was drawing to a close.

“We believe that these suspects were positioning themselves in a way to triangulate on these officers from two different perches… and planned to injure and kill as many law enforcement officers as they could,” Brown restated.
Presently, the Police confirmed they are still sweeping the downtown area, and no explosives have been found yet.

However, they (security operatives) have intercepted a car after a person threw a camouflaged bag into the back and sped off, leading to detention of two occupants.