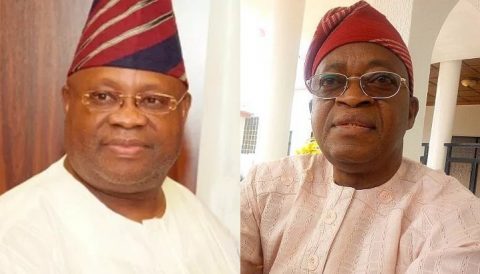 (AFRICAN EXAMINER) – I was in Nigeria last year as part of an advanced Commonwealth group preparatory to the general election this year. We were in Osun state at a time the election was conducted late last year. The memory of what happened between September 22 to 27th haunted and disturbed me.

What we first discovered when we lodged at a popular hotel at Osogbo, the state capital was the deep unpopularity of the ruling party. Less than 24 hours, we got to know of one Senator Adeleke, said to be very popular with the people. We did not get to meet him, but we met the ruling party candidate; Gboyega Oyetola. The campaign was marred with violence. That Adeleke campaign train was attacked several times even at the state capital. I add this because we were told his brother just died in a controversial circumstance before the election.

On the day of election on September 22, we were at various polling units before we went to a place called Ilesa, not far from the capital. The process went well and collation of results commenced. Soon the live transmission of result started. That Adeleke was leading consistently until the final announcement of results was suspended. On resumption, the results started changing with APC returning huge unexplained figures. These figures were consistently challenged by Mr Dele Adeleke; the PDP State Collation officer on live TV and to crown it all, the electoral officer shockingly said the election was inconclusive. Tension rose and harsh condemnation trailed the decision. It was clear the winner was robbed of victory.

As if that was not reprehensible enough, the rerun was violently militarised with many killed and maimed. We observers were not allowed to observe the election in the affected seven polling units. The rerun was not an election, but an electoral hijack dominated by thuggery and fatal intimidation that denied opposition voters opportunities to partake at the election. In fact, I left Nigeria a day after, deeply disappointed at how low some state officials can go to rob electorate of their sovereign will.

From my base in Canada, I followed the development on that Osun election very keenly. I read how Nigerian lower court restored the mandate to the Senator Adeleke as well as the jubilation that ensued. At first, I thought the verdict was fake news. This was because I have been made to understand that election rigging is a norm in Nigeria, that winners hardly emerge through free and fair election.

But a quick check on the web showed that ruling was real. The judge indeed held that the said Adeleke won and that the election was conclusive according to the Nigerian constitution. I read all the details and I called our friends at the Commonwealth secretariat in London. I indeed sent links to the Lower court ruling and they were all amazed that Nigeria can actually correct electoral errors and injustice. That judgement was a landmark pronouncement with courageous intent to enforce the will of the voters.

Then few weeks after, I read again that the earlier ruling has been overturned. It was a rude shock because when I read the grounds, I noticed they were based on extraneous, frivolous foundations, abandoning the substance and substantive issue of a winner openly robbed of victory on live television. The second judgement was openly reviewed by colleagues from democracy observation world as mere political and purchased pronouncement, not grounded in facts and law.

Now I read that Nigerian highest court is billed to decide on the case. This is why I decided to pen this OpEd. I want to urge the final justices to dwell on the substance of this matter rather than frivolous technical considerations. Our team observed that election and we like most Nigerians attest that the Senator Adeleke won that election. This is not about partisan politics. This is about justice being done.

I also learnt that the Nigerian apex court has a reputation of delivering judgements without fear or favour. I read of several cases so decided. There is no case to make a statement of commitment to justice than this Osun case. A ruling in favour of that Senator Adeleke will enhance the rating of Nigerian judiciary and that of Nigerian democracy in the eyes of the international community.

On a last note, as a legal practitioner, Nigerian top court is a reference point across commonwealth countries. That reputation must be sustained by using Osun case to send message to politicians that democracy is about the supremacy of people’s vote. I wish Nigeria well.