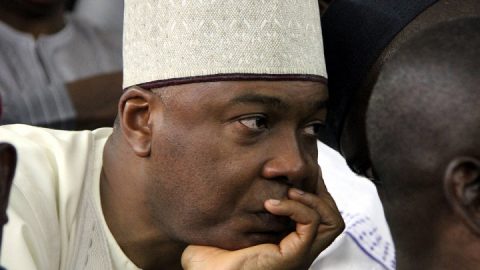 (AFRICAN EXAMINER) – A Federal High Court sitting in Ikoyi, Lagos state on Monday ordered for interim forfeiture of the Ilorin residence of the immediate past Senate President, Dr Bukola Saraki.

This was contained in a statement by Mr Wilson Uwujaren, Head of media and publicity of the Commission.

“The Ilorin Zonal Office of the Economic and Financial Crimes Commission (EFCC) had approached the court, presided over by Justice Ridwan Aikawa for an order of interim forfeiture of Saraki’s house

“The house is worth about N1 billion and it is located at No. 1, Abdulkadir street, G.R.A, Ilorin, Kwara State.

“The claim was on the grounds that the house was acquired through the proceeds of unlawful activity,” Uwujaren said.

The head of media said that while ruling on the exparte application filed by Rotimi Oyedipo, EFCC Lawyer, Aikawa ordered that the court order should be published in National Newspapers.

“The Judge further said that any interested parties in the property should show cause while the villa should not be forfeited to the Federal Government,” Uwujaren said.

He said that the commission in moving application, said that the said property was reasonably suspected to be built from government’s money and other proceeds of crime.