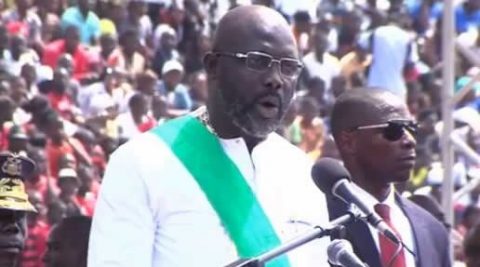 (AFRICAN EXAMINER) – Former soccer star George Weah, 51, was sworn in Monday as Liberia’s new president in a ceremony held at a packed sports stadium in the capital of Monrovia.

The presidents of Gabon, Ghana and Sierra Leone were in attendance, as well as Weah’s former fellow soccer stars.

“I have spent many years of my life in stadiums, but today is a feeling like no other,” Weah said. He thanked outgoing president Ellen Johnson Sirleaf for “laying the foundations on which we can now stand in peace.”

Weah ran against former vice president Joseph Boakai, who is stepping down after two terms — the maximum allowed under Liberia’s constitution.

Weah promised that his first priority would be a crackdown on corruption.

Monday’s ceremony marks the country’s first peaceful transition of power in over 70 years./voa