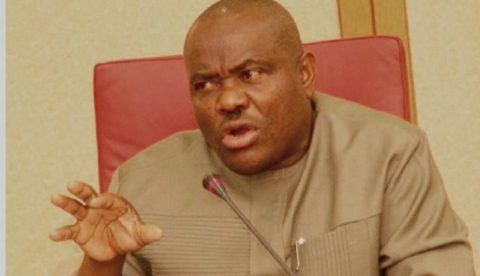 (AFRICAN EXAMINER) – Gov. Nyesom Wike of Rivers on Friday announced the arrest of 22 staff of Exxon Mobil, a multinational oil company, for entering the State in violation of the State Executive Order on Covid-19.

The governor, who made this known at a news Conference in Port Harcourt, said that the oil workers, who entered Rivers from Akwa Ibom, were arrested by security agencies.

He said that the 22 oil workers would be charged to court.

According to Wike, Carveton Helicopters also apologised to the state Government over the conduct that led to the arrest of their pilots and passengers for violating the restriction orders.

The governor also pointed out that the Exxon Mobil matter would be what he called “a test case in legal jurisprudence in the country’’.

He said: “Security agencies arrested 22 staff of Exxon Mobil who came into the state from neighbouring Akwa Ibom State in violation of the extant Executive Order restricting movement into the state.

“We do not know the Coronavirus status of these individuals.

“Even though security agencies advised that they be allowed to go back to Akwa Ibom State, I insisted that the law must take its course. This is because nobody is above the law.

“As a responsive government, we have quarantined them in line with the relevant health protocols and they will be charged to court.’

Meanwhile, the Petroleum and Natural Gas Senior Staff Association of Nigeria (PENGASSAN) has called for the release of its 21 members on essential duty who were arrested by security agents in Rivers.

PENGASSAN made the call in a statement jointly signed by the President, Mr Ndukaku Ohaeri and the General Secretary, Mr Lumumba Okugbawa on Friday in Lagos.

The union expressed displeasure over the continuous harassment of its members on essential duty in the oil and gas industry despite their exemption from lockdown.

“On April 16, about 21 of our members from Exxon Mobil on essential duty going into Port Harcourt for quarantine before going offshore, were arrested by men of Nigeria security agencies under the Rivers Police Command.

“The members were arrested on the pretext of enforcing the Executive Orders assumedly proclaimed by the State Government in the wake of the Coronavirus pandemic.

“We are therefore miffed that operatives of government security agencies who are vested with the responsibilities to enforce laws should turn around to intimidate and harass our members who are on legitimate and patriotic duty as essential workers.

“Our association condemns this new form of intimidation and therefore demands an unconditional release of all the 21 staff of ExxonMobil still under detention with apologies,” it said.