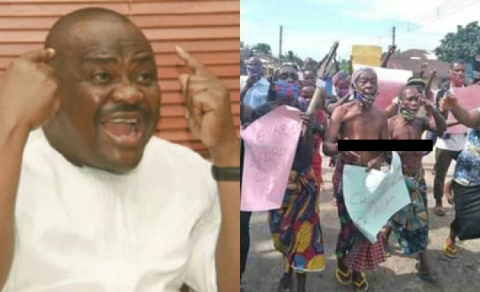 (AFRICAN EXAMINER) – The Governor of Rivers, Nyesom Wike, has taken the spotlight in twitter as some elderly women gone topless to protest the release of one of their son, the manager of the demolished hotel in Port Harcourt who allegedly tested positive to coronavirus.

It will be recalled that the governor had demolished two hotels in Port Harcourt and this brought about a lot of public criticism and in a swift reaction, the governor has stated that the decision to demolish the hotel was not taken by him alone but by state Security Council.

He said: “I don’t take decisions alone in the fight against COVID-19. All decisions are taken by the State Security Council and they are for the overall interest of Rivers people.

“You know people applaud government decisions when it suits them but when it does not favour them they say it is politically motivated.

“Rivers State Government does not have anything against hoteliers in the state but decided to shut down their activities because some cases of COVID-19 were recorded in hotels.”

However, with the total lockdown of the state due to the coronavirus, many persons who reside in the state find it disturbing and it wasn’t surprising when the government announced that the lockdown has been relaxed but weddings and burials remain banned.

These have made the governor to trend on the micro blogging space as many who are in support of his action praised him while those who are not condemn and criticize him.