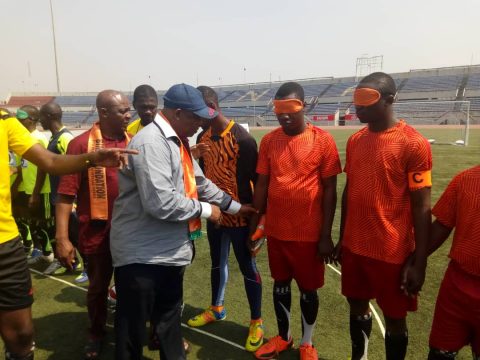 (AFRICAN EXAMINER) – Plans have been concluded by Nigeria’s Ministry of youth and Sports through the Para-Athletics Federation of Nigeria, for the raising and unveiling of a National blind football team, to be known as Star Eagles.

National President of Para- Athletics Federation of Nigeria, Dr. Geoffrey Ogu, who disclosed this to sports writers over the weekend at the Nnamdi Azikiwe sports stadium Enugu, during a 4 -day national blind football trial, hosted by BINA Foundation in Enugu, said that his Association wants to raise a national blind football team ahead of the 2020 Olympics games in Tokyo.

African Examiner Sports reports that “BINA Foundation” is an Enugu based multi-national pharmaceutical company, which has a department that takes care of people with special needs, including the blind.

The 4-day national trial being attended by blind footballers from various parts Nigeria, including Abuja, the nation’s federal capital territory, will be coming to an end on Sunday, 20th, January.

Dr. Ogu also said the Foundation was choosing by the Federation to host the trials because it has an existing blind football team and relevant facilities for the special game.

According to him, ”Para sports has been one of the strong sports in the country, and globally, as many of the Para-Athletes have done the country proud with golds, silver and bronze in several national and international competitions.

”The Tokyo 2020 will be the maiden edition of the blind football competition in Olympic event, and we want to go there with a strong team to make history,”

In her address, founder and president of Bina foundation, Mrs Ifeoma Atuegwu, said that the organization has trained over 150 blind and virtual impaired persons in football.

Represented by the foundation project facilitator, Chikwendu Amobi, the founder, stated that the trials were in line with the nation’s vision of producing a national team for the 2020 Olympics.

‘She said: “We have trained over 150 blind and impaired Men and Women in blind football, 20 coaches and referees and 20 guides as well as 20 special goalkeepers from various states of the country.

”The joy of the visual impaired are my strength and I feel happy engaging them in what the full-fledged d persons do. I want Nigerian to know that there is ability in disability, that is why we started this blind academy.

”In 2018 we took a lead forward to organise and sponsor blind football league tournaments for both men and women in order to sow the seed for the establishment of a national team,” she stated.

Mrs. Atuegwu hinted that the foundation will soon embark on camping and extensive training of the selected footballers “in our academy in preparation for the onerous task ahead.

She however, thanked the Governor of Enugu State, Chief Ifeanyi Ugwuanyi, Para-Athletics Federation of Nigeria, Archbishop of Enugu province of Anglican Communion His Grace Dr Emmanuel Chukwuma for their gesture to the visual impaired.

One of the goal scorers in the trial match played at the occasion, Gabriel Igho, expressed joy for taking part in the trail and scoring a goal for his side.

He said ”I feel elated that I scored but not by my own making because the goal came from our team work and thank God, we pull out a draw,” he said.