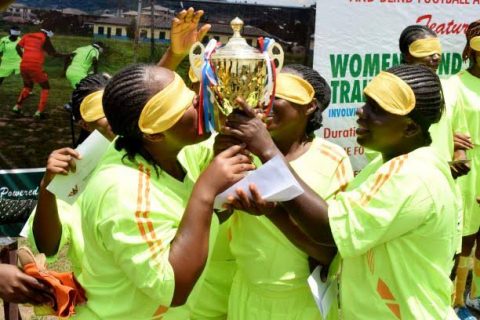 African Examiner sports reports that Players of the visiting African Team were selected from Ivory Coast, Cameron and Ghana.

Participants from the two teams received medals as part of appreciation from the organizer and host of the First Ever- Africa Women Blind Football Training Camp and Games Nigeria, Bina Foundation.

In his remarks at the closing ceremony of the soccer event, President and Founder, Bina Foundation for people with special needs, Lady (Mrs,) Ifeoma Atuegwu, expressed happiness over the successful conclusion of the, game.

She hinted that Bina Foundation is a nonprofit organization that has since inception in 2010, been working for improved personal development, economic empowerment, social inclusion and human rights of people with special needs in Nigeria.

Mrs Atuegwu stated that their primary focus in hosting the event was to promote and develop blind football for men, women and children in Nigeria and Africa as a whole.

According to her, Blind Football was inaugurated in Bina Foundation in April 2017 with about 120 visually impaired men.

She further disclosed that in the spirit of gender equality and human rights of women, the foundation inaugurated the Women’s Blind Football on 21st August 2017 with 30 women

“In summer 2018, the project expanded to include the formation and funding of two women and five men blind football clubs who participated in National league tournaments.

“In February 2019, some of our women players were privileged to participate in Women Blind Football Camp and Games in Tokyo, Japan. The foundation established the only fully equipped and staffed Blind Football Training Academy in Nigeria which now is also the national training center for blind football.

“It is worthy of note that Bina Foundation is the only registered organization in Nigeria recognized for blind football at the national level by the Federal Ministry of Youths and Sports Development.

“We are working with Paralympic Committee to promote our Nigeria National Blind Football Teams, the Star Eagles for men and the Star Falcons for women to international recognition.

The match which took place at the main bowl of the Nnamdi Azikiwe stadium was watched by soccer enthusiasts from south East states and other parts of Nigeria.