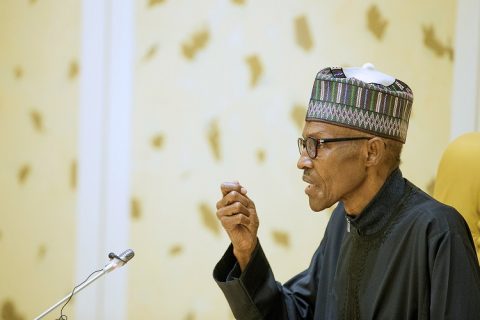 ABUJA, NIGERIA (AFRICAN EXAMINER) – Less than 24 hours after his letter which scored President Muhammadu Buhari low in performance, the Federal Government has replied former President Olusegun Obasanjo saying he may have been too preoccupied to notice Buhari’s many achievements.

Minister of Information and Culture Alhaji Lai Mohammed gave the FG reaction Wednesday while he was addressing the State House correspondents at the end of this week’s Federal Executive Council FEC meeting at the Presidential Villa, Abuja.

The former President  (Tuesday) released to the media his letter to President Buhari, complaining about the poor state of economy and advising him against re-contesting in 2019.

He, however hailed the President for better performance on security and anti-corruption war.  Against this background, Alhaji Muhammad acknowledged Obasanjo’s positions on the two areas.

Below is the Full text of the Minister’s address at the briefing.

We have read the press statement by former President Olusegun Obasanjo on the State of the Nation.

For the record, Chief Obasanjo is a patriot, and he has proven this time and time again. We appreciate what he said concerning the Administration’s performance in two out of the three key issues that formed the plank of its campaign: Fighting corruption and tackling insurgency. Specifically, the former President said President Buhari

must be given credit for his achievement so far in these two areas. We thank him for this.

Apparently, the former President believes that the Administration does not deserve a pass mark in the area of the economy, which is the third of our three-pronged campaign promises.

We have no doubt that in the face of massive challenges in this area, this Administration has availed itself creditably. We believe that Chief Obasanjo, because of his very busy schedule, may not have been fully availed of developments in the government’s efforts to revamp the economy, which was battered by the consequences of over-dependence

on a commodity as well as unprecedented pillaging of the treasury.

Today, most of the indices by which an economy is measured are looking up. Permit me to say, however, that Nigeria would not have exited recession through a mere order or if the Administration had not made use of ”good Nigerians” who could help.

This Administration is making steady progress in its determined effort to revamp the economy, and the results are showing:

* Foreign Reserves have peaked at $40b, the highest level in about four years, and up from $24 billion just a year ago, even though whenwe came in, the price of oil had crashed woefully.

* According to the National Bureau of Statistics (NBC), headline inflation has fallen for 11 consecutive months, standing at 15.37% as at Dec. 2017. This is the lowest inflation rate since Jan 2017, and it has met and surpassed the target set for inflation in the

*  At about 1.8 billion dollars, the capital inflows in the second quarter of 2017 were almost double the $908 million in the first quarter.

*  In the wake of a stable Naira and increased investment inflows, Nigeria’s stock market emerged one of the best-performing in the world, delivering returns in excess of 40 percent.

*  Nigeria rose 24 places on the World Bank’s Ease of Doing Business ranking, and earned a place on the List of Top 10 Reformers in the world.

* Government agencies such as the Nigeria Customs Service are reporting highest-ever revenue collection, while JAMB, under the new management appointed by President Buhari in 2016, remitted N7.8billion to the coffers of the federal government. The total amount remitted by JAMB between 2010 and 2016 was a paltry N51 million!

These positive indices may not have immediately impacted positively on Nigerians, but Nigerians will definitely get a new lease of life a short while from now. This is because the good news from the agricultural sector, which is recording a bumper harvest, will bring down the cost of foodstuffs, especially such staple as rice, and our massive Social Investment Programme will ease the pain of the most vulnerable in the society.

When we assumed office in 2015, some 6 million farmers were involved in rice production. Thanks to the Anchor Borrowers’ programme of this Administration, we have grown that number to over 12 million farmers.

The result is that our rice import from Thailand alone has dropped from 644 metric tonnes to 22,000 MT in just two years. This is phenomenal.

Apart from rice, Nigeria is also doing well in other grains, especially Millet, Sorghum and Maize. We are now the second largest producer of sorghum after the US, the third in millet after India and our breweries are now enjoying local sourcing of those commodities.

For maize, we are producing 10 million tons while we need about 13 million tons for both human and animal nutrition. Nigeria leads the world in the yam and cassava production. We account for 70% of the world’s yam production. In two years, we hope to be the world’s largest exporter of yam! Overall, our ambition is that agriculture

should rise from 25% to 40% of GDP, so that we can banish poverty and overcome our economic anxiety.

Our Social Investment Programme is Nigeria’s most ambitious social welfare programme ever. Currently, 5.2 million primary school children in 28,249 schools in 19 states are being fed daily; 200,000 unemployed graduates have enlisted into the N-power Job Scheme, and a quarter of a million loans already distributed to artisans, traders, and farmers.

Here is a synopsis of what we have done in this area:

Generation at an all-time high of 7,000mw and all can be transmitted

Lagos-Kano Standard Gauge is on.

The entire stretch ready 2021; Negotiations on for Coastal Rail covering 15 cities from Lagos to Calabar.

25 major highways being funded with the N100b Sukuk Bond, and all geo-political zones are benefitting equally

This Administration is not unaware of the enormity of the challenges facing the nation, but we are up to the task. We have taken the bull by the horns, and long-suffering Nigerians will begin to experience a new lease of life as our efforts yield fruits. We will not go into a state of funk for whatever reason.

On the Herders/Farmers’ clashes, this Administration is determined to end the crisis resulting from this once and for all, not minding the fact that the clashes predate us. we urge Nigerians to have faith in the Administration’s ability to resolve the crisis, and to watch out for concrete measures in this regard.

On whether or not President Muhammadu Buhari should run for another term, it is true that many Nigerians have been calling on the President to run again, while others are opposed to his return.

However, we believe this issue is a distraction for the President at this time. This is because Mr. President spends every waking hour tackling the enormous challenges facing the nation, most of which were bequeathed to his Administration by successive past Administrations. He is committed to fulfilling the mandate given to him by Nigerians in  2015. And that’s where we are right now!

Finally, we have no reason to believe that former President Obasanjo has any motive beyond the well-being of the nation in issuing his Special Press Statement. We have also taken his admonition in good faith, and we thank him most sincerely for taking time off his busy schedule to pen such a long statement.