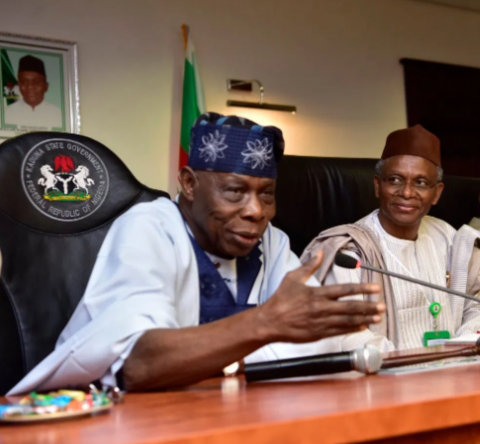 (AFRICAN EXAMINER) – Obasanjo’s  recent visit to the Governor of Kaduna State, Malam Nasir El Rufai, has dominated the media the past one week.  During the visit, the former President reportedly reflected on the Kaduna state governor’s spat with the Senate when he was Federal Capital Territory (FCT) minister and his refusal to apologise to the red chamber when he fell out with them during his confirmation hearing. Following from these Obasanjo concluded:   “We need a character like this; a man that you know where you stand with him. Any job given to him will be well done,” the former president added.  Obasanjo was further quoted as saying that El Rufai, who was also at one time the DG of the Bureau of Public Enterprises during the Obasanjo administration,  was“one of the best persons to work with. He is a near genius.”

“I made women matter in my government. He has done the same in Kaduna. He is a very good learner,” Obasanjo, who is often criticized for wanting to take credit for achievements of persons or institutions remotely connected with him, was equally  reported  to have said.  On his own, El Rufai credited a substantial part of whatever skills he learnt in public service to his tutelage under the Ota farmer. He was quoted as saying: “Obasanjo is a mentor; I learnt many public service skills from him while I served as a minister under his government.”

There are a number of speculations surrounding the visit:

One, photos of El Rufai and Obasanjo during the visit showed them in ear-to-ear grin.  But those photos and wide grins masked an ugly feud from the past.  For instance in his book, The Accidental Public Servant (2013), El Rufai sought to belittle Obasanjo by claiming  that he went on bended knees to beg Atiku to support his re-election bid  in 2003 because  Obasanjo knew that without Atiku’s support it would have been over for him politically. He also argued that Obasanjo foisted a sick Yaradua and a largely incompetent Jonathan on the country not out of patriotism but as revenge against Nigerians for denying him a third term. Obasanjo, in his own book,  My Watch (2015) disparaged El Rufai as a pathological liar whose only loyalty is to himself, and not to anyone else.  While quarrelling and making up may be part of the fluid alliance system that underpins our politics,  (which is said to be driven primarily by personal  interest),  it may be tempting to speculate on the interest that both Obasanjo and El Rufai now share in common.

Two,  why was it necessary for Obasanjo to visit El Rufai in Kaduna, rather than El Rufai visiting  Obasanjo at his  presidential library in Ota or any other of his residences? Given El Rufai’s rumoured presidential  ambition  in 2023, the traditional pattern is that those seeking for political offices pay homage to the political godfathers, not the other way round.  Many of Obasanjo’s private visits to Governors in the past have been in the context of either commissioning a project in the state or as a sideline of another major event. Following from this,  Obasanjo visiting El Rufai to support his presidential ambition by innuendo  opened  a vista for several speculations: Is Obasanjo in a sort of crisis over the extent of his influence such that he now had to go to support a putative candidate’s presidential aspirations  when such support has apparently  not been requested?  Is Obasanjo feeling that El Rufai is the anointed candidate of a certain power bloc and he wants to ingratiate himself to that bloc?  Could it be that Obasanjo is trying to align himself with what some people regard as “the progress made so far in Kaduna State”?  Given the disastrous outing of the African Democratic Congress which Obasanjo supported during the last election, and having failed to stop the re-election of President Buhari, is Obasanjo simply seeking for continued relevance?

Three,  Obasanjo is often said to be a master of timing. While his voices or moves are rarely anything out of the ordinary, however given his networks and connections, his moves quite often accentuate the trajectory of a particular conversation. El Rufai has been dropping hints of his ambition to run for the presidency. As a Nigerian, he has the right to aspire for any office in the land. This means that the visit will most likely boost his putative ambition. But I also feel that making himself a front runner or major candidate so early in the game carries enormous risks that outweigh the benefits. Yes, it may guarantee him good media space and invitations to public engagements but  it will equally attract distractions, including from fortune hunters  – not to talk of making the  work of opposition researchers  easier.

Four, if Obasanjo’s visit to El Rufai has remotely anything to do with the Kaduna Governor’s rumoured political ambition, then Obasanjo, at this stage of the game, will have to find a very creative argument for supporting that ambition –  at a time when many people from the South, Obasanjo’s home constituency, expect power  to be rotated to that zone.  It should be recalled that the 2015 election was fought and won  on the shadows of the 2011 zoning controversy.  At that time, many people from the North felt that given the power rotation agreement between the North and the South, that Jonathan, who became president after the death of Umaru Yaradua, should simply serve out Yaradua’s remaining term and allow the North to complete their turn of eight years. The feeling of being cheated in 2011 was therefore one of the most potent drivers of the 2015 election in the Northern part of the country. During the zoning controversy of 2011, Obasanjo backed Jonathan largely on the premise that  it was important for an ethnic minority, especially one from the Niger Delta that lays the country’s golden eggs,  to be given a sense of belonging.  So what argument would Obasanjo use to support the retention of power in the North in 2023 – when power rotation and restructuring are likely to be important drivers of the politics of 2023?

Five, if Obasanjo’s visit was meant to express his political preference for 2023, it also behoves on the electorate to interrogate the quality of candidates Obasanjo endorsed or supported in the past. From Shehu Shagari in 1979, Yaradua in 2007, Jonathan in 2011 and Buhari, in 2015, Obasanjo turned into a rabid critic of all these candidates he had passionately supported, accusing each of incompetence and sundry malfeasances. This raises an important question: if Obasanjo has a way of turning again his own candidates, can we trust his judgment or are we better off turning against anyone he anoints? This was the strategy of Alan Greenspan,   who famously attributed his successes as Chair of the Federal Reserve of the United States from 1987 to 2006 to the fact that he always did the opposite of the advice received from the two Bretton Woods institutions – the World Bank and the IMF. Perhaps it may be time for the country to take such an approach towards Obasanjo’s anointed candidates for any political office.